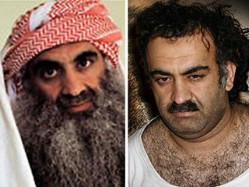 The Pentagon will announce today that Khalid Sheikh Mohammed and his four alleged 9/11 co-conspirators are being charged for a second time through the military commissions at Guantanamo, NBC News has learned.

The Office of Military Commissions sent a letter to families of 9/11 victims on Monday notifying them of the update in the case. After a judge is assigned, a panel of military officers will be selected as potential members of the commission, and then the accused will be arraigned within 30 days, the letter said.

The letter also notified families that the Office of Military Commissions will be seeking to meet with them for witness interviews next month during trial preparations.

The five defendants were first charged by the military commissions on February 11, 2008.

The charges were then dismissed without prejudice on January 22, 2010 when the Obama administration made the decision to try the suspects in federal court in Manhattan.

When the Justice Department abandoned those efforts following intense protests, including from Mayor Bloomberg, the cases were turned back over to the military commissions.

The commissions will now refile the original charges, which include conspiracy, murder in violation of the law of war, attacking civilians, intentionally causing serious bodily injury, hijacking aircraft and terrorism.

The Obama administration announced in April that it would try the suspects in a military tribunal because Congress has imposed restrictions on where Guantanamo detainees can be tried.

Rather than fight those restrictions and delay the trial, Attorney General Eric Holder ordered prosecutors to dismiss the federal indictment in New York in favor of a military trial.

Holder emphasized that prosecutors had been “prepared to bring a powerful case” against the suspects and said he still believed a civilian trial would have been the best choice.

A man whose mother was on American Airlines Flight 11 said he felt some hope how that the process was under way.

“I would like to have this behind us,” said Dominic J. Puopolo Jr. “It’s been a long time. Ten years without a trial is very hard.”

The 2009 announcement that the 9/11 suspects would be tried in New York was met with fierce opposition from many elected officials, families of victims and those who live and work in Lower Manhattan, who would have had to contend with several rings of heavy security for the months of the trial.