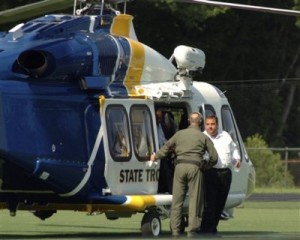 Gov. Chris Christie sure knows how to get around in style.

Christie apparently used the state helicopter to fly him to his son’s high school baseball game Tuesday night. Now, criticism is coming in like fast balls.

Christie, who has made a name for himself nationally for his tough talk and budget cutting ways, arrived with wife Mary Pat just before the game between Delbarton High School and St. Joseph’s of Montvale in Montvale.

The governor’s oldest son, Andrew, is the starting catcher for Delbarton – a position Christie also played in high school.

“Gov. Christie obviously doesn’t include himself in his hollow call for shared sacrifice,” Assemblyman Paul Moriarty, D-Turnersville, said as he called on the governor to publicly detail his use of state police helicopters and reimburse the taxpayers for all costs associated with personal and political trips.

However, Colonel Rick Fuentes, the Superintendent of the New Jersey State Police, released a statement Wednesday saying that Christie’s use of the helicopter didn’t come at an additional cost to taxpayers or the State Police budget.

Fuentes said ” it is important to understand that State Police helicopters fly daily homeland security missions.”  He added that the missions and flight time are used for training purposes and that the flight hours are those that “would be logged in any event.”

“Any flights transporting the Governor would be subordinated to priority needs for our aircraft including rescue and emergent law enforcement missions,” Fuentes said.

Flanked by state police troopers, the Christies watched the game from the stands until the 5th inning, The Star-Ledger of Newark reported. Play was stopped briefly while the helicopter took off.

“It’s inappropriate,” said state Democratic Party chairman John Wisniewski. “The only thing I can think of is that he wanted to look presidential flying in. It’s his version of Marine One.”

New Jersey State Police officials say it costs $2,500 an hour to fly in their helicopter, but that ferrying Christie to his son’s high school baseball game didn’t cost taxpayers anything extra.

Fuentes said Christie has been aboard state police helicopters 35 times since taking office. Fuentes didn’t say which, if any, of the trips were personal or political in nature and whether the governor has ever reimbursed the state for taking the trips.

The governor had no public schedule Tuesday but had a dinner meeting later at the governor’s mansion in Princeton with a delegation of Iowans who tried – unsuccessfully – to persuade him to run for president.