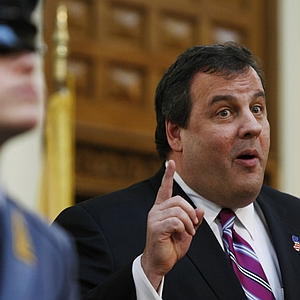 Thousands of public workers are expected to stage what leaders vow will be their biggest Statehouse protest yet over a controversial bill to force them to pay more for health insurance and pensions. The bill is up for final passage in the Assembly, which would send it to Gov. Chris Christie, who is expected to sign it swiftly.

Leading up to today’s battle, a state workers union chapter Wednesday filed a federal suit against the state saying its contract was broken because pension payments were skipped. And Christie pitched the plan at a town hall where he was booed by some teachers.

At a town hall in Fair Lawn, Christie said the measure, a focal point of his agenda, is needed to restore the state’s fiscal balance and ensure the solvency of the pension fund.

“We have support with both political parties to do this,” Christie said. “It isn’t like other states.”

Fair Lawn schools finished for the summer Tuesday and a group of teachers packed the meeting. The crowd was less friendly than most of his meetings: half the attendees booed when he went through his proposals, and the other half, supporters of the governor, clapped louder in an attempt to drown them out.

“As always in our democracy, there will be people who disagree,” Christie said, acknowledging the dissenters.

Lauren Gimon, a math teacher at Fair Lawn High School, joined a group of about 50 teachers who stood on street corners out the meeting holding signs and waving at passing cars. Gimon said she’s hopeful the efforts by public employees to rally in Trenton and across the state will have some influence.

“It made a difference in Wisconsin,” Gimon said.

With passage in the Assembly seeming almost inevitable, one union began what could be the first of a several court battles. Local 1033 of the Communication Workers of America filed a lawsuit in federal court claiming the state failed to meet his contractual obligations when it didn’t contribute to the pension system.