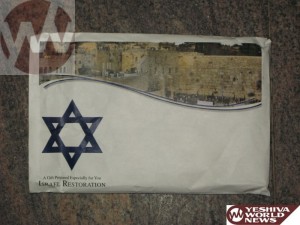 The streets of Flatbush & Boro Park are once again being flooded with missionaries the past few days, handing out literature with a “Star of David” across the front of it. They are also specifically delivering the package to homes which have Mezuzas on them.

Read the press release below sent to FlatbushScoop.com by NYC Councilman David Greenfield. It was previously posted at the end of May, when the same missionaries were stuffing mailboxes with the same envelope.

Councilman David G. Greenfield is warning members of the Jewish community about a deceptive mailing from a missionary group calling themselves the “Israel Restoration.” The mailing, which arrives in an envelope emblazoned with a prominent Star of David and graphic of Jerusalem, includes a letter and DVD aimed at converting its recipients.

“I received a number of calls and emails today from rabbis and community leaders asking me to warn others about this mailing,” explained Councilman Greenfield. “While these missionaries have a constitutionally-protected right to free speech, it is important that recipients of this package do not fall victim to the deceptive tactics of the ‘Israel Restoration’.”

The mailing appears, at first glance, to come from a legitimate Jewish group. The letter included even purports to have been sent by a Jewish individual. However, at the conclusion of the letter, the sender encourages recipients to dial an 800 number in order to learn more about the “Messiah.” The Orthodox Jewish communities of Boro Park, Midwood and Flatbush are often the targets of missionaries. Constituents have reported receiving similar mailings in the past and, in recent months – and as FlatbushScoop.com has reported – plans for an expanded missionary center and seminary were announced for a site located on Coney Island Avenue.

“I am grateful for the rights and freedoms afforded to me, and to all of us, by the constitution,” said Councilman Greenfield. “However, I also believe we need to have truth in advertising. Preying on unsuspecting Jewish members of the community is unacceptable. I encourage anyone who receives this mailing to exercise their constitutional right to throw it directly in the garbage.”