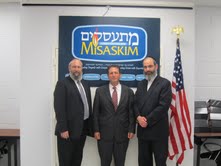 Senator Savino paid a visit to Misaskim on Thursday, August 18th. She marveled at Misaskim’s positive interactions with the law enforcement community and commended the organization for its ability to anticipate the needs of individuals in crisis. “I’m incredibly impressed,” she told Misaskim representatives.

Senator Savino was eager to hear how her office could assist Misaskim in the vital community service role it plays on a daily basis. Misaskim volunteers and the senator discussed the type of state legislation that can facilitate the streamlining of legal requirements relating to burial in New York State. In addition, Senator Savino said that she and Senator Dov Hikind expect the Leiby Initiative to be approved as soon as the State Senate gets back into session. This bill will grant tax credits to business owners who install security cameras on their premises. “Once [business owners] do that,” Senator Savino explained, “they become more likely to be vigilant themselves.”

On Monday, August 22nd, Councilman Brad Lander toured Misaskim’s facilities. The councilman was intrigued by the scope of the g’mach nechumim — the free-loan society. Councilman Lander soon learned that the g’mach is only a small portion of Misaskim’s daily operations.

The councilman had a long talk with Misaskim representatives about several community safety programs that are currently being developed. He applauded Misaskim’s ongoing efforts to promote community safety and offered his full support. Councilman Lander also explored various ways in which the city can back Misaskim’s efforts to deliver aid in times of need.

“So many people in the community are grateful of the services provided by Misaskim,” Councilman Lander said toward the end the meeting.  “I’ve seen the chesed work of Misaskim at shivah houses and I know that the organization provides an important bridge between the community and government agencies. It’s inspiring to come and see how Misaskim makes it happen”

Misaskim thanks both Senator Savino and Councilman Lander for taking time out of their demanding schedules to learn more about the organization’s activities. “Misaskim is honored by the generosity and genuine interest Senator Savino and Councilman Lander have expressed during their meetings with Misaskim,” declared Rabbi Yeruchim Silber, Director of Government and Community Relations at Misaskim. “We are honored to work hand-in-hand with the offices of both the Senator and the Councilman as we move forward.”