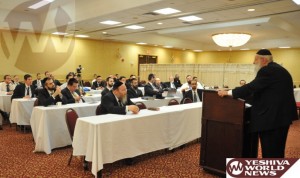 Hundreds of kiruv professionals gathered in Stamford, Connecticut recently for the 25th annual convention of AJOP: The Association of Jewish Outreach Programs. For the second year in a row, the convention combined its traditional focus on kiruv rechokim with a commitment to the vital task of kiruv kerovim, adding a Shabbos gathering devoted to InReach, featuring many stars of the kiruv world.

As always, the outreach convention drew some of the most talented and accomplished mekarvim from throughout the world, including South America, Moscow, England and other countries. And as always, there were numerous sessions addressing the many, many dimensions of kiruv, such as Research: Taking the Guesswork out of Kiruv, by Dr. David Rosmarin, Addressing the Image of Orthodox Jews in the Media, with Rabbi Avi Shafran and Rabbi Motti Seligson, Training in Shalom Bayis Counseling by Rabbi Mordechai Twerski, Keeping a Baal Teshuvah Community Healthy & Normal by Rabbi Josh Spinner, and from HaRav Dovid Cohen, shlit”a, halachic perspectives & advice about non-Jews who participate in the belief they are Jewish.

This year’s convention, however, confronted a challenge that is facing organizations throughout the Torah world: How do we know we are making the best use of our resources? Are classic programs still working? Are there new ideas that need to be developed? Are we focusing our energies in the best possible ways? (See the current issue of Klal Perspectives, which provides an entire symposium on this topic.)

These are difficult questions for any organization, especially in a rapidly changing world. And it is especially challenging when there are so many organizations to coordinate, as in the case of the kiruv movement. But Baruch Hashem, with the guidance of gedolei Torah, and with the commitment of a world of mekarvim who follow them, this annual gathering of AJOP enabled an outstanding group of kiruv professionals, leaders and interested laymen to work together in making the adjustments necessary to stay current with today’s challenges.

In addition to over thirty individual sessions, the convention offered several roundtable discussions – for executive directors and for shul rabbis, as well as for particular areas, such as kiruv in small communities, baal teshuvafamily dynamics and programs for young professionals.

Standing out among these was the roundtable for programs directed at young professionals, which emerged as one of the biggest growth area in kiruv today. In one example, the DATA (Dallas Area Torah Association) kollel recently launched a program called YJP (Young Jewish Professionals), which has already attracted over four hundred participants to their events in their first year alone.

Down the hall from the outreach sessions were a parallel set of sessions devoted to InReach. These programs were designed both for members of the frum community who felt the need for inspiration and answers about thederech haTorah and for those who wanted to share such ideas within their communities.

Sessions included Good Answers for Tough Questions, by Rabbi Mordechai Becher, Motivating teens to Live Inspired Lives, by Rabbi Aryeh Lightstone, Tapping into Your Gifts and Inner Strengths, by Rabbi Benzion Shafier and What We Believe: Exploring Torah She’Baal Peh, by Rabbi Eliyahu Bergstein. These sessions built on the many fascinating presentations that were offered on Shabbos, including The Incredible Journey of the Soul – a program for women by Mrs. Aliza Bulow, The Four Leshonos of Jewish Leadership, by Rabbi Dr. Tzvi Hersh Weinreb and What’s the Most Tantalizing Unanswered Question in Chumash? by Rabbi Dovid Fohrman.

After this wrenching presentation, attendees were treated during dinner to an extraordinarily powerful schmooze from R’ Sholom Kaminetsky, shlit”a, in which he identified the key basis for kiruv as kol Yisrael areivim ze lazeh. He quoted the gemara that at Har Sinai, not only did all of Klal Yisrael enter a bris to keep all the mitzvos, but each individual entered a bris that he would ensure (as an arev) that every other individual keeps all the mitzvos (see Sotah 37b). If some Yidden are not keeping mitzvos, explained R’ Sholom, each one of us is coming up short in his own mitzvos, as well. If another Yid does not put on tefillin, my own mitzvah of tefillin is also incomplete.

He went on to work through the commentary of the Ohr HaChaim to the parsha of hashavas aveda in Ki Seitzei, which shows how each word and phrase teaches about the mitzvah to return Hashem’s lost children to him.

Although these joint sessions marked the conclusion of the InReach convention, the outreach programs continued for another day on Monday, with yet an additional day that offered specialty trainings for those who registered – in fundraising, developing new ideas and “Bringing Your Teaching into the Digital Age.”

As everyone returned to their communities, the conversations were only getting started. There is so much to accomplish in meeting this great challenge of our generation according to the shifting realities of today’s world. Spending at AJOP time with the many great people who are leading the charge throughout the country and throughout the world, it is easy to be proud of the great work that is taking place. But it should only motivate us to redouble our efforts to ensure that all our efforts are given the best opportunity to succeed.