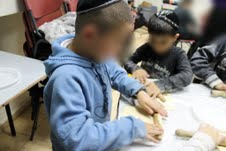 Some 100 women and children rescued by Yad L’Achim from Arab villages in recent months spent an enchanting, inspiring Shabbos in Yad Binyamin this past week.
After arriving by chartered bus from points all across Israel, the women and children settled into their rooms and then split up, with the women attending a fascinating lecture and their children participating in a very special arts and crafts workshop. At the end of the lecture, the women were surprised by the beautiful gifts their children had made for them in the workshop: Shabbos candlesticks.

There was still time before Shabbos for the children to go outside and enjoy the petting zoo that had been especially set up for them.

Candle-lighting was especially moving. These mothers, who until recently were being held captive in Arab villages with no opportunity to express themselves as Jewish women, stood for a long time in front of their Shabbos candles. With eyes clenched tight, they whispered prayers of gratitude and pleaded for better days ahead for them and their children.

Before Kabbalos Shabbos began, they heard an inspiring talk from Harav Kroche who spoke of how they were in the process of awakening from a period of grief and sorrow and opening a new chapter in their lives.

The beautifully set Shabbos meal was festive and uplifting. The centerpiece was a lecture by the chairman of Yad L’Achim, Harav Yisrael Lifschitz, who spoke of the strength of the Jewish woman, and her unique role from generation to generation.

After the children were put to bed, the mothers participated in a fascinating symposium in which each was given an opportunity to share questions that weighed on her heart. One by one, the women raised the sensitive issues that come up during the process of rehabilitating their lives as Jews.
“How can I be sure that my daughters never make the mistake I made?”
“Does Hakadosh Baruch Hu forgive me for the mistake I made, and accept my teshuva?”
It was only in this confidential, supportive environment that the women felt safe to raise the questions, and hear answers and insights from Yad L’Achim social workers that inspired faith and hope.
The Shabbos atmosphere was so magical that women and children alike found themselves wishing it would never end. After havdalah, the survivors wrote out resolutions that they had taken upon themselves over Shabbos. They were given magnets to pin their resolutions up on their fridges back home and remember what they had committed to undertake.

Immediately after Shabbos, a special program was held for the children. They were given the opportunity to bake their own matzos on an oven brought in especially for the event. Before boarding the buses home, Yad L’Achim provided them all with boxes of mehudar matzos and beautifully decorated haggados.

All of the gifts the survivors received over Shabbos were made especially by Malchus Waxberger, the renowned artisans of Judaica.

Yad L’Achim will host a special Pesach Seder for the Jewish women & children rescued from the Arab Villages. Additionally, for those who cannot attend Yad L’Achim finished this week matching up all of the survivor families with host homes for the Pesach seder, where they will finally be able to proclaim: Now we are free.