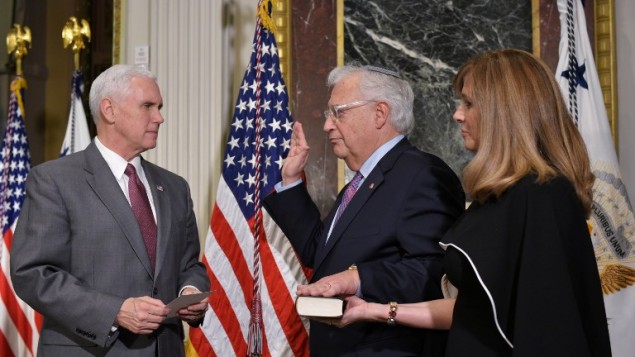 Mr. David Friedman, an Orthodox Jew and prominent attorney from NYC has been sworn in as the next United States Ambassador to Israel. Friedman has already been labeled the “staunch supporter of settlements” by Haaretz, representing the left-wing total inability to fathom having a US representative that is not in line with their left-wing liberal agenda.

In fact, Friedman in his civilian life has been a staunch supporters of Beit El and its institutions as well as other endeavors that are a far cry from the Haaretz agenda.

The Swearing-in Ceremony, which took place in the Indian Treaty Room of the Eisenhower Executive Office Building in Washington, DC at 17:00, was attended by Vice President Mike Pence who opened the ceremony by praising Friedman’s character and complimenting his family, his wife, children and five grandchildren. The ceremony was also attended by the Israeli ambassador to the US Ron Dermer, and a good friend of Mr. Friedman’s, Eli Beer, who is the Founder and President of United Hatzalah.

Vice President Pence said that “Mr. Friedman has always shown a love for both Israel and the United States and has been a supporter of the humanitarian work that Israel does, and that he has worked tirelessly to deepen the friendship between the two nations.” Pence continued to say that Friedman knows in his heart “that those who hate Israel do not hate Israel for what she does wrong, but rather for what she does right. David, your record of compassion and care for the Israeli people is an inspiration to the President and an inspiration to us all. Israel is our most cherished ally. Under President Trump’s leadership, the United States will always be a faithful friend to the Jewish State of Israel and David, the President and I both know that you will help us make that immutable bond between our people and the people of Israel even stronger still.”

After Friedman took the oath of office he thanked the Vice President for his kind words and thanked President Trump for “his courageous leadership, his friendship, and his guidance. I am humbled by the trust that he has placed in me and I will do everything that I can to justify his faith and confidence in my abilities. I am very proud to say that my nomination represents the first time in American history that the US Ambassador to Israel was nominated by the President as early as the first day of his presidency and was the first ambassador approved by the senate and given the oath of office. That demonstrates how high the Trump administration prioritizes the unbreakable bond between the US and the state of Israel.”

Beer and United Hatzalah have been staunch supporters of Mr. Friedman through the Senate hearings that have taken place since Mr. Friedman received the appointment by President Trump. Mr. Friedman is a close friend and supporter of the organization and has been an International Committee member for the past ten years. He has also been a personal friend of United Hatzalah’s President and Founder Eli Beer. Friedman’s support for the organization was honorably mentioned during the Senate Committee hearing and commented on by Democratic Committee Member Robert Mendez from New Jersey.

Just before the ceremony Beer said, “Mr. Friedman is a close personal friend and he and his wife Tammy have been proud supporters of what we do. Bringing unity to the region through lifesaving is one of the goals of our organization, and it is something that Mr. Friedman values as well. Over the past ten years, he has shown that he recognizes the importance of saving lives in Israel and in providing quick treatment by highly trained medical responders. We wish him tremendous success in serving the government of the United States and President Trump and helping to build a stronger relationship between the United States and Israel.”