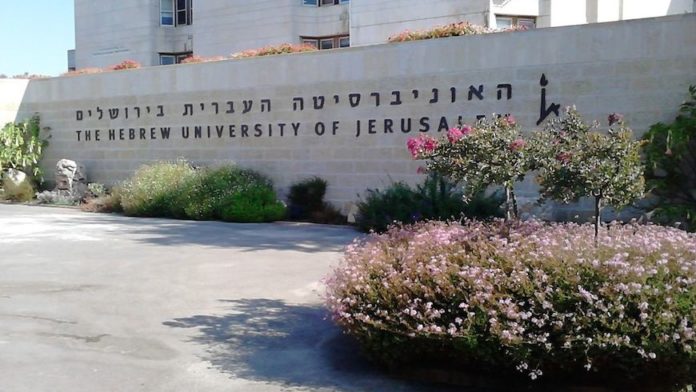 Over the past several months, the Hebrew University of Jerusalem has been home to a series of virulently anti-Israel events and inciting activities against the State of Israel, according to a new report published by Im Tirtzu.

The report maintains that the university administration has been unwilling to address these issues and has even defended many of these seemingly unlawful anti-Israel activities on the grounds of free speech.

The report begins in May 2017, documenting a university-authorized protest in which Arab students brandished signs of convicted terrorists and called for “Intifada” against Israel. According to the report, university security prohibited Im Tirtzu activists from staging a counter-protest, yet defended the pro-terror protest by arguing that “nothing [was] said that constitutes a violation of the law.”

A number of other protests are surveyed in the report, including protests in November and December 2017 that saw students praising “Shahids” and vowing to “continue the struggle” and “expel the occupier” and the “Zionists.”

In December 2017, the report writes that Arab students desecrated a memorial erected in memory of murdered IDF soldier, Ron Kokia, and, upon confrontation, the Arab students assaulted Jewish students and a security guard. According to the report, no disciplinary measure was taken by the university against the perpetrators.

In addition, the report calls attention to Hebrew University’s defense of a professor who claimed in class that Israel’s likeness to Nazi Germany is a fact, the discovery of several swastikas spray-painted on campus grounds, and a university-sponsored conference featuring a speaker from an openly pro-BDS organization.

“When the Hebrew University administration permits calls on campus to destroy the State of Israel in the name of free speech, it paves the way for more serious acts,” said Im Tirtzu Chairman Matan Peleg.

“It is very unfortunate that the great Zionist legacy of Hebrew University is being tarnished by these uncurbed anti-Israel activities. The writing is on the wall and the university must take this incitement seriously and immediately take action against this dangerous phenomenon.”