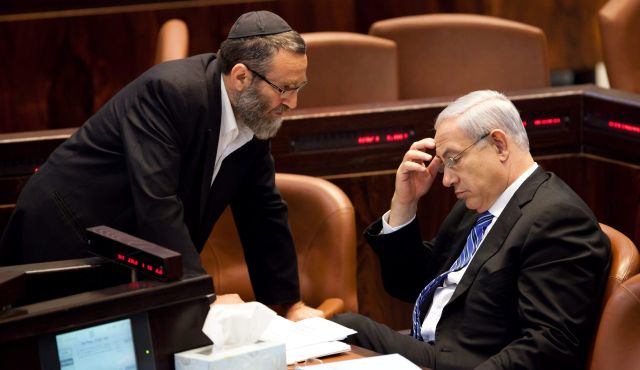 Prime Minister Binyamin Netanyahu refused to meet with the heads of the Charedi parties on Tuesday, in order to discuss the newly drafted conscription law, which was expected to be voted upon in the Knesset plenum on Wednesday morning for its first reading.

Netanyahu’s refusal is widening the rift that has formed between the Charedi parties and the Likud party. An additional factor that widened the rift was the publication of a video clip of  Charedi party leaders from UTJ who were caught on film blaming the difficulties in passing the conscription law on the propaganda of Tourism Minister Yariv Levin of the  Likud. The video was published by Bhadrei Charedim

At the same time that this rift is forming with Likud, Defense Minister Avigdor Lieberman and the Yisrael Beiteinu party continued their attempts to block the conscription law from passing this morning when Lieberman wrote: “With regards to the enlistment and conscription of Charedim the position of Yisrael Beiteinu is clear and transparent. We will only support a law that is created by the professional staff assembled by the Defense Ministry.

“When I first met with the assembled team I told them the following: “That I, like all other politicians have an agenda and that they must ignore that. Their agenda needs to be one thing and one thing only, the welfare of the IDF and the State of Israel. As a member of t he government coalition, Yisrael Beiteinu is  willing to compromise on a lot of issues. But one issue we will not compromise on and that is the security of the state of Israel,” Lieberman said.

“Therefore, any attempt to bring forth a politicized law with regards to this weighty issue will be met with fierce opposition from every member of our party and from all of our friends in the government and the Knesset. I hope that everyone involved will succeed at ignoring electoral incentives and only weigh the matter based on security considerations.