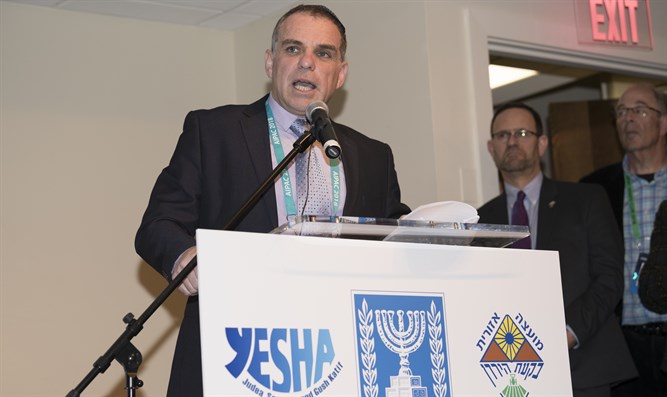 Four hundred participants packed into an event to support Yehuda and Shomron in face of delegitimization and boycotts, the event was organized by Yesha Council in partnership with the Ministry of Strategic Affairs and Jordan Valley Municipal Council. Minister Gilad Erdan sent a heart-warming video message while Oded Ravivi, Chief Foreign Envoy of the Yesha Council, Education Minister Naftali Bennett, Justice Minister Ayelet Shaked, Energy Minister Yuval Steinitz and Israel’s Consul General to New York Ambassador Dani Dayan where among the VIP speakers. The event focused on solidifying Israel’s connection to her ancestral heartland and building bridges for peace by supporting the industrial zones of Yehuda and Shomron which employ thousands of Israeli and Palestinians that work together in peace.

Speaking in a video message from the Knesset Minister Gilad Erdan said: “Shalom from Jerusalem, and welcome to this celebration of Yehuda and Shomron. I’m proud to be partnering with the Yesha Council, and the Jordan Valley Regional Council, to sponsor this event. As the Minister in charge of leading Israel’s fight against delegitimization, I’ve set a clear policy: We will oppose any and all forms of the anti-Semitic hate campaign known as BDS and especially those targeting Yehuda and Shomron. We’re doing this in three ways: One- We’re exposing the true face of the BDS campaign and its real goal- the destruction of Israel as a Jewish state. Two- We’re spreading the truth about Israel, about our historical and legal rights, and about the co-existence between Jews and Arabs in Yehuda and Shomron. And three- we’re supporting the people of Yehuda and Shomron, by helping them reach out directly to you, Israel’s supporters around the world.”

Oded Ravivi, the Yesha Council Chief Foreign Envoy: “I stand in front of you and wish to argue that our communities are not the obstacle to peace but rather an integral part of the solution that will bring peace to the region…Applying Israeli law on the region of Yehuda and Shomron will clarify the rules and regulations with relation to daily life in the region and by doing so, demonstrate to the world that on a day to day basis we are actively living peacefully and cooperating with our Palestinian neighbors and giving them as well as the Jewish population, clear and legal tools to protect each one’s rights…. The industrial areas in Yehuda and Shomron are living examples of “islands of peace” where Jews and Arabs are standing one alongside the other by the conveyer belt and in other jobs, producing different products. The byproducts of their working together are friendly warm relations, understanding, the building of bridges and true caring one for the other.”

Education Minister (former CEO of the Yesha Council) Naftali Bennett: “The Palestinian state is off the table… it’s done.. now the big question is how we progress…the world will respect a country that respects itself. We cannot ask for recognition in Judea and Samaria without full Israeli recognition and implementation of Israeli law.”

Justice Minister Ayelet Shaked: “The industrial zones in Yehuda and Shomron and the your bringing their agricultural produce to Washington is significant and tells not only the story of the settlement but also the coexistence that takes place daily in these areas.”

Energy Minister Yuval Steinitz, “Boycotting the settlements in Yehuda and Shomron boycott of the very essence of the State of Israel. Israel cannot survive without Yehuda and Shomron – it will not be possible to defend it strategically. God forbid, the boycott will develop for the entire State of Israel. We must work together, the Jewish world and its supporters against these attempts to boycott”

Israel’s Consul General to New York (former Chairman and Chief Foreign Envoy of the Yesha Council) Ambassador Dani Dayan: “The mother of all delegitimization claims against Israel is that we don’t belong, that we invaded a land to which have we have no claim …in order to shatter that absurd claim there is no better place to prove our right to the land than Yehuda and Shomron …There are those that say I don’t boycott Israel I just boycott the settlements, to those people I say failure to visit or buy from Yehuda and Shomron is BDS”