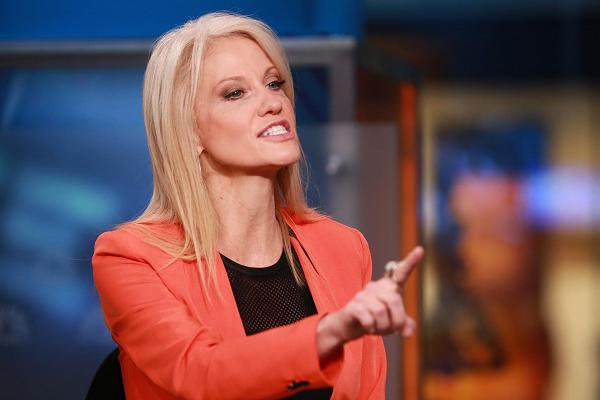 The Office of Special Counsel, which is unrelated to Robert Mueller’s office, says Conway violated the Hatch Act twice last year when she spoke out in support of Republican Roy Moore and against his Democratic rival, Sen. Doug Jones, in the Alabama Senate race.

“Ms. Conway, in her official capacity, attempted to influence the Alabama special election by advocating for the success and failure of candidates in that race,” the report stated. Her comments came in separate interviews with Fox News and CNN.

Special Counsel Henry Kerner sent his office’s findings to President Donald Trump on Tuesday “for appropriate disciplinary action.” Because she is a presidential appointee, it is up to Trump to decide what — if any — punishment she will receive.

“Kellyanne Conway did not advocate for or against the election of any particular candidate,” deputy press secretary Hogan Gidley said in a statement. “She simply expressed the President’s obvious position that he have people in the House and Senate who support his agenda.”

“In fact, Kellyanne’s statements actually show her intention and desire to comply with the Hatch Act – as she twice declined to respond to the host’s specific invitation to encourage Alabamans to vote for the Republican,” Gidley added.

Career government officials found to have violated the Hatch Act can be fired, suspended or demoted, and fined up to $1,000.

Conway came under fire for violating a different ethics provision last year, when she pushed Trump supporters to purchase products sold under the Ivanka Trump brand. The White house told the Office of Government Ethics she was “highly unlikely” to do so again and that it was providing her with additional ethics training.

The report said Conway did not respond to multiple requests from the Office of Special Counsel to explain her comments.

In its response to the special counsel’s office, the White House argued that Conway’s job includes the role of providing “commentary” on Trump’s thinking, and that the unique circumstances of the Moore race need to be considered. Moore faced multiple allegations of sexual assault against teenagers, prompting Trump and the Republican National Committee to withdraw support, only to re-endorse Moore amid a contentious Senate debate on the GOP tax bill.

The Office of Special Counsel found that the White House reasoning “lacks merit,” adding that Conway’s comments went beyond commentary.

Walter Shaub, the former director of the Office of Government Ethics who is the senior director of the Campaign Legal Center, the nonpartisan group which filed the OSC complaints against Conway, called on Trump to take disciplinary action against her.

“The White House cannot continue to have one standard for the federal workforce generally and a lower standard for appointees who are close to this President,” Shaub said in a statement.