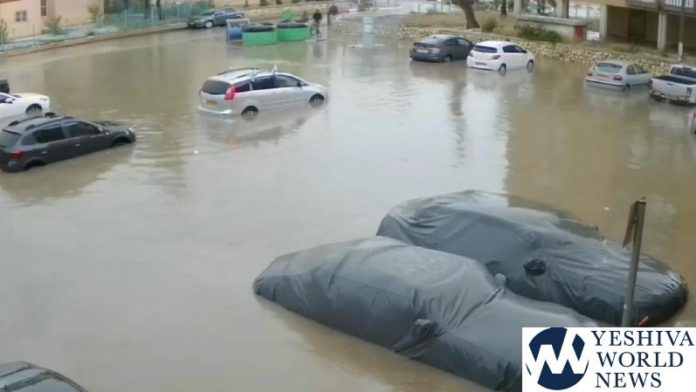 One fatal incident occurred in the Mamshit stream in southern Israel. Search and Rescue Units from the area were searching for a 17-year-old bedouin boy who was said to have been swept away by a flash flood near the normally dry stream bed. The Search and Rescue Units utilized a helicopter to finally locate the boy nearby in the Negev desert. Unfortunately, he was pronounced dead after being located.

In eastern Gush Etzion, near the town of Ma’aleh Amos, Search and Rescue teams searched for a young Palestinian woman who was reportedly also swept away by a flash flood. Rescue crews eventually found her body much further down in a nearby ravine.

In a separate incident, a tour bus carrying school children and their teachers was trapped by a flash flood on highway 3199 in the Negev desert. After being trapped for some time, the 43 passengers and driver were evacuated to the nearby town of Kfar Hanokdim where, according to a spokesperson from the organization, Magen David Adom treated them for light hypothermia.

The students were later transported to Soroka hospital for further treatment and observation.

In the south, sections of Highways 40 and 90 were closed to traffic throughout the afternoon. Other roads in the center of the country were also submerged and dozens of cars suffered water, electrical and even structural damage.

The mall in Rishon Lezion on Rothschild Street suffered a partial ceiling collapse due to flooding, which then resulted in flooding inside the mall as well. United Hatzalah volunteer responders who arrived at the scene within minutes said that no one was physically injured, although there were a few people who went into emotional shock.

In Tel Aviv, the flooding caused the closure of various streets and the Sde Dov airfield for a few hours.Hail and heavy rains lasted for numerous hours in both Tel Aviv area and the Jerusalem region.

Israel’s Water Authority said that the rain was “important, blessed and good.” However, they added that even heavy precipitation such as this could not make up for the years of drought-like conditions that Israel has suffered recently.

The Israel Meteorological Service said that the storm was expected to linger in the area and that rain is expected to continue overnight and into Thursday across the country. Further flooding in Southern and Central Israel is expected and travelers have been warned to pay attention to announcements regarding road closures and unsafe hiking paths.