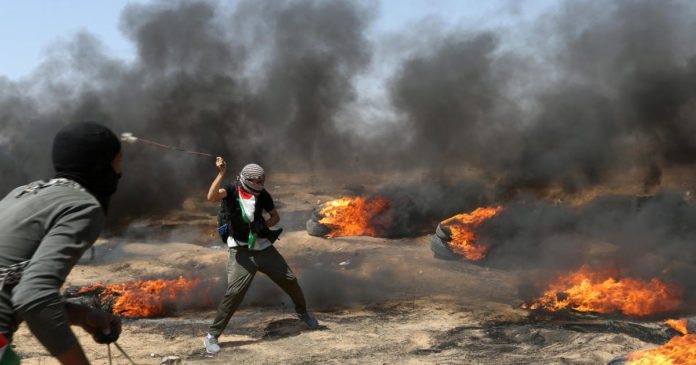 Israel’s security services are assessing the current situation on the Gaza border in light of Yom Yerushalayim and the opening of the U.S. embassy in Jerusalem tomorrow and seeing the preparations of Hamas, they are expecting that the events to unfold will increase the security tensions in the area.

According to the Israeli evaluations, Hamas is attempting to create an air of desperation for the people in the Gaza strip so that the international community will have to come in and bail them out of the dead-end path that they have set themselves upon and have taken the two million residents of Gaza along with them.

[Hamas Leader Promises Next Week’s Protests Will Be ‘Wild, Tens Of Thousands Ready To Die’]

Hamas has no compunction against sending women, children and elderly to attack the border fence in order to draw the international community in to bail them out and put Israel into a moral dilemma.

It is expected that Hamas will put their plans into action starting tomorrow morning. Hamas will not be waiting until Nakba-Day on May 15th and will begin their final march against the fence tomorrow. Tens of thousands of protesters being drummed up by Hamas are expected to walk to the fence. The IDF’s mission will be to prevent any attempt to break through the fence to the Israeli side in an effort to prevent Hamas attacks on Jewish town along the border area.

Hamas hopes that the IDF will be drawn into a conflict and thus delegitimize Israel further for defending themselves. Should the situation deteriorate along the border, Hamas may feel that they have “no choice” but to open fire on Israel to protect the people of the Gaza Strip and thus begin firing rockets again at Israeli military and civilian targets.

Israeli media outlet YNET reported that Egypt supposedly proposed a deal to Hamas which would see the organization stand down from their intention to send throngs of people to attack the border fence with Israel. Leader of Hamas’ Political Bureau Ismail Haniyeh supposedly returned from Egypt to the Gaza Strip on Sunday without giving Egypt an answer.

Thousands of IDF soldiers will be manning the area surrounding the border fence in an attempt to contain those attempting to break through it as well as in Judea and Samaria to prevent any escalation of violence and attempted terror attacks in those areas. The Eshkol Regional Council issued a statement to the press stating that in spite of the heavy military presence in the area, schools, programs, and celebratory events will be taking place as usual in the region.