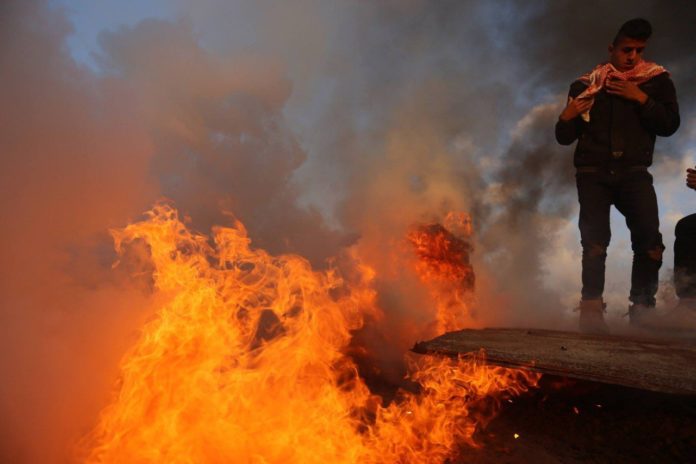 At least one mortar shell was fired at IDF soldiers from Gaza during the ongoing violence this afternoon, Monday, 29 Iyar. Live gunfire is also being directed at soldiers, which was met with tank fire. Rocks are projected at soldiers with slingshots, making them potentially fatal. In addition, tires are set ablaze.

According to a report from the IDF spokesman, three terrorists were detected placing a bomb along the border police today. Soldiers opened fire, eliminating all three of the terrorists. At this time, Gazan sources report 37 dead and over 1,600 wounded, many from smoke inhalation from the tires the Gazans set ablaze.

Hamas reports over 50,000 people taking part in the fence confrontations and that number is expected to grow as Hamas calls on the masses to take part in the day’s violence.

The video, provided by the IDF Spokesman’s Office, shows the terrorists who were trying to place the IED near the border, but they were detected and eliminated.