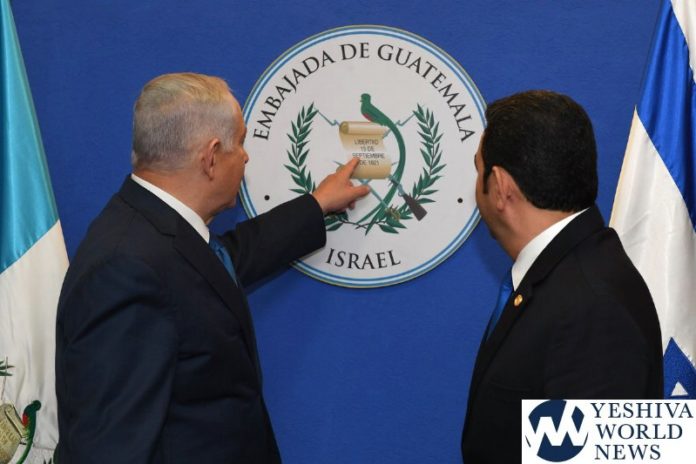 Guatemala festively opened its new embassy in Jerusalem on Wednesday, becoming the second country to do so after the United States, and giving Israel a diplomatic boost as it faces international criticism for the deadly violence on the Gaza border.

Guatemalan President Jimmy Morales dedicated the embassy just two days after a high-powered American delegation also marked the transfer of its embassy in Israel from Tel Aviv to Jerusalem.

Prime Minister Benjamin Netanyahu said it was fitting since Guatemala also followed the U.S. to be the second country to recognize Israel 70 years ago.

“You were always among the first,” he said at the ceremony. “We remember our friends and Guatemala is our friend, then and now.”

We welcome the opening of the embassy in Jerusalem. Thank you my friend. We stood here six months ago and I told you ‘Let us open an embassy here’ and you have done so. I very much appreciate it.” 🇮🇱🇬🇹#GuatemalaEnJerusalén pic.twitter.com/O52sBfkoKt

President Donald Trump announced his decision in December to recognize Jerusalem as Israel’s capital and move the American embassy there, triggering a joyous reaction from Netanyahu’s government.

The embassy move added fuel to the weekly Palestinian protests in Gaza demanding the right of return to Israel and the lifting of a decade-old naval blockade.

They culminated Monday when the “Gaza Health Agency” claimed that Israel killed nearly 60 Palestinians in clashes along the border.

The Gaza protesters set tires ablaze, sending up thick plumes of black smoke, and hurled firebombs and stones toward Israeli troops across the border. The Israeli military, which has come under international criticism for firing on unarmed protesters, said Hamas militants tried to carry out bombing and shooting attacks under the cover of the protests and released video of protesters ripping away parts of the barbed-wire border fence. The military said 14 of those killed Monday were actively involved in carrying out attacks.

PM Netanyahu: “Thank you @jimmymoralesgt. Welcome to Jerusalem, welcome to Israel, and one more thing, one more thing: because I want a few streets to be named for Israel in Guatemala my next trip to Latin America goes through Guatemala. Thank you, with your kind invitation.” pic.twitter.com/lpr25Uk2fF

Israeli Defense Minister Avigdor Lieberman said Israel did everything it could to prevent civilian casualties but that Gaza’s Hamas rulers were to blame for using them as human shields.

“The Hamas leadership is a group of cannibals who treat their children as armament,” he said during a visit to a military base in southern Israel. “They have rocket armament, personal armament and another kind of armament — their children and women.”

Since the Hamas-led protests began on March 30, more than 110 Palestinians have been killed and more than 2,500 wounded by live fire, according to the Palestinian Health Ministry. Palestinian officials say the vast majority of the casualties have been unarmed protesters.

The heavy death toll Monday, along with hundreds of wounded, made it by far the bloodiest day of cross-border violence since a devastating 2014 war between Israel and Hamas. It also triggered a diplomatic backlash against Israel. 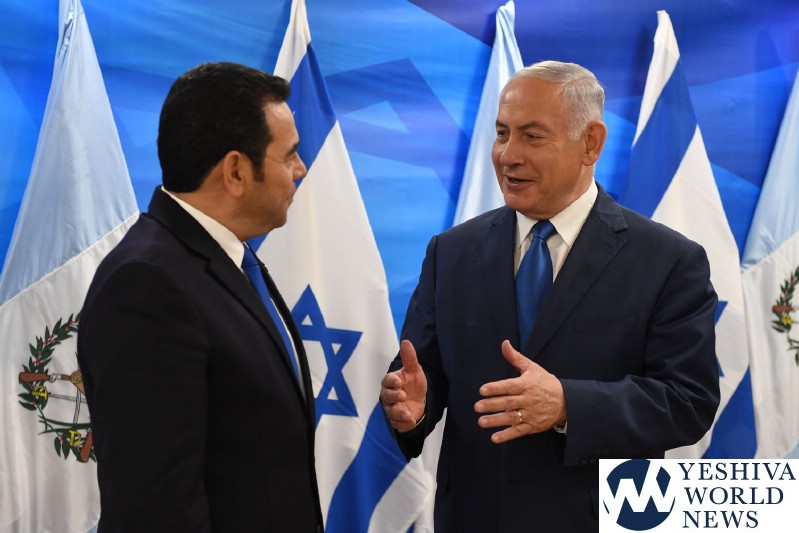 The U.N. Security Council held a special session that began with a moment of silence for the Palestinians who were killed. In Geneva, the U.N. human rights office said Israel has repeatedly violated international norms by using deadly live fire to repel protesters.

Turkey expelled Israel’s ambassador and consul general and several European countries summoned the Israeli ambassadors to their foreign ministries for questioning and called for an international investigation.

The diplomatic spat with Turkey intensifed after what Israel called the humiliating treatment of its ambassador, who was subjected to a severe security screening upon his departure from the airport in Istanbul. The event was intentionally captured by Turkish media. In response, Israel has summoned a top Turkish diplomat to be reprimanded.

Turkish President Recep Tayyip Erdogan has long been a fierce critic of Israel and dramatically ratcheted up his rhetoric this week over Gaza and the U.S. embassy move. Netanyahu retorted that a “man whose hands are drenched in the blood of countless Kurdish civilians in Turkey and Syria is the last one who can preach to us about military ethics.”

At the same time, Israel has found other nations following the U.S. lead and rallying to its defense. Besides Guatemala, Paraguay says it will also relocate its embassy to Jerusalem and Romania, the Czech Republic and Honduras have said they are considering doing the same.

At Wednesday’s ceremony, Morales said his country was bringing a message of “love, peace and fraternity” to Israel. The Guatemalan Congress recently passed a law marking May 14 as “Israel-Guatemala Friendship Day.”

Marking the move, the Jerusalem municipality illuminated the walls of the Old City walls late Tuesday with flags of Guatemala, Israel and the United States and a message thanking Morales.