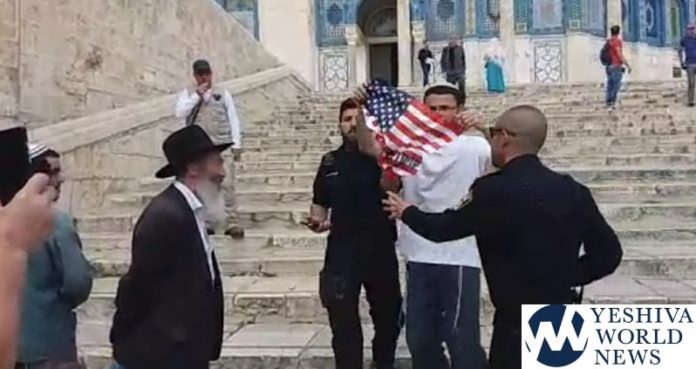 As seen in the accompanying video, a Jewish male was escorted off of Har Habayis by police after he pulled out and waved and American flag. Police, as they usually do, escorted the group and seeing the young man’s actions, the response was immediate as a Muslim Waqf Authority official looked on. The flag has the words “Thank you Trump” on it.

Before being ousted from the holy site, the man was speaking about King Cyrus (כורש), and how he permitted the Jews to return to Israel to build Bayis Sheni. He then compared this to the actions of US President Donald Trump, making reference to the opening of the US Embassy in Jerusalem this week and how he will help Jews to build the Third Beis Hamikdash.

The young man was arrested and will have to appear for a hearing at which time it will be decided if he is distanced from the site for a period of time.

It should be noted that Gedolei Yisrael throughout the generations along with the Chief Rabbinate of Israel, have prohibited visiting Har Habayis as there is an Issur Kares.