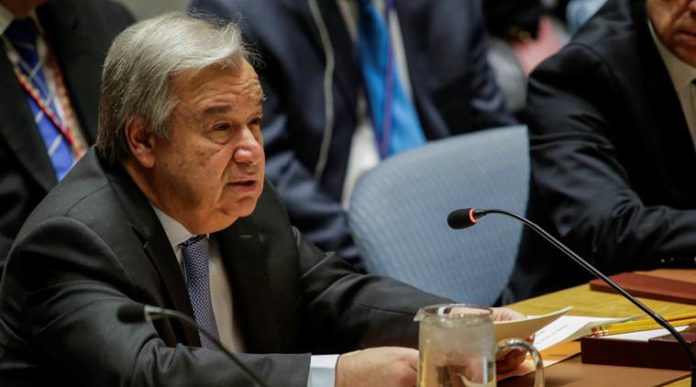 Secretary-General Antonio Guterres strongly criticized Hezbollah for operating as the most heavily armed militia and a political party in Lebanon and urged the militant group to halt military activities inside and outside the country, including in Syria.

In a report to the Security Council obtained Monday by The Associated Press, Guterres also called on Lebanon’s government and armed forces “to take all measures necessary to prohibit Hezbollah and other armed groups from acquiring weapons and building paramilitary capacity” outside the authority of the state.

He said Hezbollah’s military activity violates a 2004 Security Council resolution ordering all Lebanese militias to disarm and the Taif Accords that ended the country’s 1975-90 civil war. In the semi-annual report on implementation of the 2004 resolution, the secretary-general said Hezbollah’s engagement in the Syrian conflict also violates Lebanon’s official policy of “disassociation,” or neutrality in regional affairs.

Guterres said the report demonstrates Hezbollah’s failure to disarm and “its refusal to be accountable” to state institutions that the U.N. resolution sought to strengthen.

“In a democratic state, it remains a fundamental anomaly that a political party maintains a militia that has no accountability to the democratic, governmental institutions of the state but has the power to take that state to war,” he said.

Israel and Lebanon have been in a state of war for decades and do not have diplomatic relations.

The border with Israel has remained mostly quiet since then, but Guterres said an alleged increase in Hezbollah’s arsenal poses “a serious challenge” to the Lebanese government’s ability to exercise authority and sovereignty over the entire country.

“I call upon countries in the region that maintain close ties with Hezbollah to encourage the transformation of the armed group into a solely civilian political party, and its disarmament,” Guterres said.

Guterres said Hezbollah’s military arsenal and involvement in Syria continue “to be denounced by a number of voices in Lebanon, who consider those issues to be destabilizing factors in the country and ones that undermine democracy.”

In addition, he said, “many Lebanese see the continued presence of such arms as an implicit threat that those could be used within Lebanon for political reasons.”

Hezbollah is considered a terrorist group by the United States, but its political wing has long held seats in Lebanon’s parliament and was part of Lebanon’s outgoing coalition government.

Parliamentary elections earlier this month were the first in Lebanon since war broke out in Syria in 2011 and Hezbollah made major gains. Its leader, Hassab Nasrallah declared “mission accomplished.”

Nonetheless, Lebanese analysts say the next Cabinet, like the outgoing one, will likely be a unity government that includes Hezbollah.