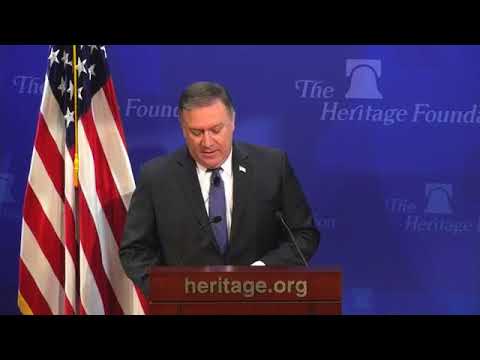 Addressing an audience hosted by The Heritage Foundation, US Secretary of State Mike Pompeo explained “Two weeks ago President Trump withdrew from the Joint Comprehensive Plan of Action, or more commonly known as Iran agreement for several reasons. Because it fails to guarantee the safety of the American people from risks posed by Iran…No more…No more acceptance of Iranian missiles landing in Ri’ad and the Golan Heights. No more cost-free expansions or Iranian power. The JCPOA put the world at risk due to its failed clauses.

“The JCPOA merely places an extension until such time Iran will assemble a nuclear bomb…As we have seen from recent Israel remarkable intelligence operation, Iran has lied for years and operated in bad faith and it is worth noting the lies continue. Just two weeks ago an Iranian official told a US talk show ‘we never wanted a nuclear bomb’.

“The JCPOA lacks measures to measure and compel compliance are inadequate…instead of using its new-found wealth to assist the economy, Iranian leaders used it to fuel proxy wars throughout the Mideast and fuel Hizbullah and Hamas. Iran advanced its march across the Middle East during the JSPA. The wealth created by the west has fueled the campaign. Barak Obama made a bet, that the money would bring Iran to comply with world norms, which did not occur.

“Thanks to Iran, Hizbullah is armed to the teeth and sets its sights on Israel…Iran has displaced over six million Syrians in Syria and caused 5 million to seek new venues for housing. This was all during the JCPOA…We are working digilently to bring Americans wrongfully imprisoned in Iran home…Iran continues to be the worlds largest sponsor of terror…Today we ask the Iranian people, is this what you want? To be a proxy for Hizbullah?

“Instead of helping its own people, Iran seeks a corridor stretching from its own shores to the Mediterranean. Iran wants this corridor to transport fighters and weapons to Israel’s doorstep.

“In recent months Iran has flown an armed drone and launched a salvo of rockets into the Golan Heights from Syria against Israel, our steadfast ally, which has asserted measures of self-defense and the United States will unequivocally support.

“The JCPOA was a bad deal for the United States, Europe and the entire world. It is clear Iran did not end its nuclear ambitions. Iran saw the deal as the starting gun for its march across the Middle East…American’s commitment President Trump laid down in October remains. It will now be executed outside the JCPOA.

“We will continue working with allies to counter destabilization activities in the region, block the financing of terror and proliferation of missiles and other advanced weapon systems that threaten…We will also make sure Iran has no path to a nuclear weapon. Not now, not ever.

“Following our withdrawal from the JCPOA, President Trump asked me to achieve these goals on Iran. We will peruse these goals along several lines of effort. First, we will apply unprecedented financial pressure on the Iranian regime. The leaders and Iran will have no doubt about our seriousness. Thanks to our colleagues at the Department of the Treasury, sanctions are going back into effect and new ones are coming. Last week, sanctions were placed on the central bank and this is just the beginning…This will become the strongest sanctions in history when we are complete.

“Iran will have to make a choice between its keeping its economy on precious life support at home of squandering pressure resources on continuing terror. It will not have the resources to do both … (2) I will work closely with the Department of Defense to Deter Iranian aggression. We will ensure freedom of navigation on the waters in the region. We will work to prevent and counter any Iranian cyber activities and tack down Iranian operatives and their Hizbullah proxies operating the world and crush them. Iran will never again have card blanche to dominate the Mideast.

“And I remind the Iranian regime what President Trump said, it they restart their nuclear program, they will have bigger problems than they have ever had before. Third. We will also advocate tireless how they treat their people. The regime must improve how it treats citizens, it must protect the human rights of every Iranian and cease wasting Iranian wealth abroad. We asked our international partners to add their voice to ours in condemning Iran’s treatment of its citizens. Protests show Iranians are deeply unsatisfied with realities…Youth unemployment is at a staggering 25%. Government mismanagement has led to severe drought, compounded by enormous corruption and the Iranian people know this today…The regimes response shows they are running scared as thousands have been imprisoned…The women in Iran deserve the same freedom enjoyed by the men…”

The entire address in the accompanying video:

President Trump explained, negotiating a new deal is not the objective, but rather to protect the United States. He is committed to change and it is entirely up to Iran, but by the words of the senior US official, President Trump has decided the sandglass has run out and the time for change has already begun. The administration demands the closure of its heavy water reactor and the total cessation enrichment as well as granting total and uninhibited access to nuclear inspectors. The administration demands a cessation of funding of Hizbullah and the Islamic Jihad as well as any and every terror organization.

Iran must withdraw all forces from Syria among other demands spelled out in the address. Secretary Pompeo explains the length of the list is the result of the maligning Iranian regime, as in fact, the demands are quite basic.

In exchange for changes, the US remains willing to take action to better life for the Iranian people by removing all sanctions and reestablish full diplomatic and commercial ties, permitting Iran advanced technology towards the modernization of Iran and its reentry into the international economy, but this will only occur if and when compliance to demands is seen. In contrast to the previous administration, we want to include Congress in this process – a treaty would be the preferred way to go and an agreement put forward by President Trump would reflect this.

We want out allies in Europe and around the world to join in this effort against the Islamic Republic of Iran as I know they understand and agree with the goal of the US.

Pompeo acknowledges that the new policy will impact the US and other nations, who will lose money as a result, and America is willing to listen to her allies and aware some of the allies will prefer to continue working with the old agreement.