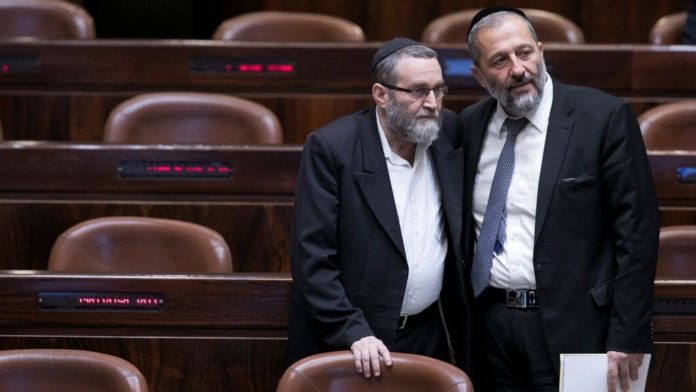 Moti Tuchfeld reports in Yisrael Hayom that a new draft law has been presented and accepted by the heads of the chareidi factions in Knesset.

The heads of the coalition parties agreed on the outline, according to which the new draft law would pass as a government bill during the summer session of the Knesset and before the law expires in accordance with a High Court order in September.

According to the report, immediately after the professional team set up by Defense Minister Avigdor Lieberman will finalize the draft law according to the needs of the defense establishment, the draft law will be passed on to Lieberman and from him to Prime Minister Binyamin Netanyahu and to the members of the mini-forum that will discuss the law without publishing the outline of the defense establishment to the public.

According to the report, it appears the small forum will include Minister of Tourism (Likud) Yariv Levin, Coalition Chairman (Likud) David Amsellem, Defense Minister Avigdor Lieberman, and representatives of the chareidi factions; Deputy Minister Yaakov Litzman, Chairman of the Knesset Finance Committee Moshe Gafne, and Minister of the Interior Aryeh Deri. In addition, Justice Minister Ayelet Shaked is likely to be included.

According to agreement Tuchfeld report, From the moment the draft law is received by the mini-forum, they will discuss it for one week only, and after the discussions in the narrow forum, the final draft will be returned to the professional committee in the Ministry of Defense for approval and from there to the Attorney General for approval and immediately, the legislative process will follow”.

Tuchfeld notes in his column “the question that remains open is whether Lieberman will ask to include the approval of the draft bill with the chareidim and the Likud to support Moshe Leon’s candidacy for mayor of Jerusalem.” Leon is backed by Lieberman and he might tie the two together. Leon would not be objectionable to Likud, but this would sabotage Minister Ze’ev Elkins chance of entering the mayoral race as he wishes to do, as the Likud candidate.

Tuchfeld reports that for the time being, this has not been raised, tying support to this legislation to backing Leon in the Jerusalem mayoral race.

Yahadut Hatorah MK Moshe Gafne related to this on Sunday evening in an interview on Kol Berama Radio with Moshe Glasner. He said, “Anyone who says that we agreed to support Moshe Leon in the Jerusalem race in exchange for Lieberman’s leniency in the draft law is a bad man, hates the world of Torah and causes it damage. I am saying this with an awareness of [the position of] all factions of Yahadut Hatorah and Shas”.

According to a BeChadrei Chareidim report, the new law does not include criminal sanctions and there will be no target goal set regarding the number of chareidim to be drafted annually.