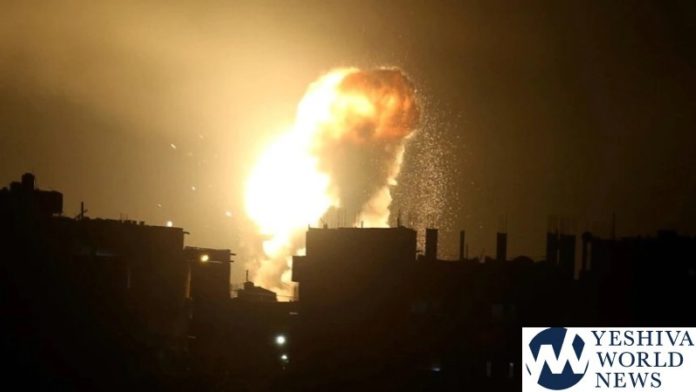 An IDF Officer was R”L killed, and another in critical condition late Sunday night, after an operation in Gaza.

Palestinian media is reporting that senior Hamas commander Nour Baraka was eliminated.
Hamas says they chased the car down, and opened fire on the occupants, which prompted Israeli airstrikes that led to the deaths of at least five terrorists.

The Israeli military said only that there had been an exchange of fire during operational activity. It said that its rocket defense system intercepted two launches from the Gaza Strip and that air raid sirens were sounding in southern Israel.

IDF officer Lt.-Colonel ‘M’ was named as the soldier killed. His name is not released due to the fact that he was a member of a special undercover force and the revelation of his identity would assist terrorists in identifying others in the unit. Another officer sustained moderate injures during the operation and following emergency surgery during the night, he is listed in stable condition this morning.

IDF choppers were seen landing at Soroka Medical Center, and sources confirm to YWN that at least 3 soldiers were airlifted to the facility. One of them was in extremely critical condition, and passed away later at night.

Due to misinformation of social media that an IDF soldier was kidnapped, the following was tweeted by the IDF to squash that false rumor:

Contrary to reports, none of our soldiers were abducted during the operational activity that took place in #Gaza.

A spokesman for Israel’s Airport’s Authority says some flight landings and departures were changed at the country’s international airport following the incident. Ofer Lefler said Sunday that the runway changes were made after the fighting began. He says they would not affect the flight schedule.

Defense Minister Avigdor Liberman reportedly rushed to the Defense Ministry headquarters in Tel Aviv, and is in discussion with senior IDF officials.

5:15 AM RECAP: 17 rockets were launched from #Gaza at #Israel. The Iron Dome intercepted 3 of them.

Following a situation assessment:
• The Israeli Railway line from Ashkelon to Sderot will be closed.
• School has been cancelled in the Israeli communities surrounding Gaza.

Which led to the martyrdom of a number of our people, and the event continues and our forces are dealing with this dangerous Zionist aggression.

Meanwhile, Israel’s prime minister is cutting short a trip to Paris because of the incident. A statement from Prime Minister Benjamin Netanyahu’s office said late Sunday that he would return overnight. Netanyahu was in Paris along with dozens of world leaders to commemorate the end of World War I. At a news conference there earlier, he defended his decision to take steps toward an unofficial cease-fire with Hamas, which appeared to be ratcheting down months of violence.

According to KAN Bet military correspondent Carmella Menashe, this was the type of operation that we were not supposed to know about, explaining the force was to enter Gaza, eliminate the target(s) and exit, without any media reports. Sadly, things went sour and the operation have been revealed, along with its tragic outcome.

At the same time, Red Alert were heard in communities in Eshkol and S’dot Negev regional councils. Seventeen rockets were launched into Israeli territory, three of which were intercepted by the Iron Dome system.

Overnight, during operational activity in Gaza, an exchange of fire broke out, killing IDF officer, Lt. Col. M. May his memory be a blessing. pic.twitter.com/Gq8a25Ppeh

Residents of Eshkol and S’dot Negev regional councils were called to stay close to protected areas. At the same time, the section of the train between Ashkelon and Beersheva, including the Sderot, Netivot and Ofakim stations remain closed until further notice. All schools in Gaza border communities are to remain closed today, Monday, 4 Kislev, as well. This includes kindergartens and daycare centers as well. Gatherings are limited to 300 or fewer persons as per the IDF Homefront Command orders of the day.

The late-night burst of violence between Israel and Hamas came just as the sides were taking steps that appeared to be toning down months of fighting. It shattered what appeared to be a turning point after months of bloodshed along the Israel-Gaza border, with weekly Hamas-led protests drawing thousands to the perimeter fence with Israel. Over 170 Palestinians have been killed by Israeli fire in the border protests, in which Palestinians throw rocks, burning tires and grenades toward Israeli troops.

Earlier Sunday, Netanyahu had defended his decision to allow the transfer of the Qatari money, rejecting criticism that the move had strengthened the Islamic militant group.

Netanyahu told reporters that it was “the right step” at the moment and that he was committed to restoring quiet along the Israel-Gaza frontier and preventing a humanitarian crisis in the coastal Palestinian territory.

ELIMINATED – An elite team of #IDF special forces carried out an undercover assassination attempt on #Hamas commander Nour Baraka deep in #Gaza. Sadly, the soldier's cover was blown and an #Israeli soldier was killed in a shootout

Israeli critics, including members of Netanyahu’s coalition, accused him of capitulating to violence and of granting relief to the embattled Hamas group.

The internationally backed Palestinian President Mahmoud Abbas, whose forces lost control of Gaza to Hamas in 2007, angrily accused the U.S. and Israel of being involved in a “conspiracy” to permanently sever Gaza from the West Bank. He promised to take unspecified measures against his Hamas rivals in the coming days.

Hamas leaders in Gaza have described the arrival of the $15 million, delivered last week in three suitcases by a Qatari diplomat, as their first major gain of more than seven months of weekly protests along the perimeter fence.

Hamas has been leading the protests since March 30 in a bid to ease a crippling Israeli-Egyptian blockade that was imposed in 2007 in order to weaken the militant group. The blockade has led to over 50 percent unemployment and chronic power outages, and prevents most Gazans from being able to leave the tiny territory.

Israel says it is defending its border against militant infiltrations, but its army has come under international criticism.

With Hamas threatening to intensify the protests and international officials warning of a looming humanitarian crisis, Netanyahu on Thursday allowed the cash into Gaza. It is the first installment of $90 million that Qatar has pledged to cover the salaries of thousands of unpaid Hamas employees for six months.

Israeli opposition figures lambasted Netanyahu for appearing to cave in to violence. Army Radio played decade-old sound clips of Netanyahu, from when he was the opposition leader, threatening tough action against Hamas and criticizing his predecessor for being too soft.

Even his erstwhile allies attacked him for indirectly doing business with a militant group that has fought three wars against Israel and is sworn to Israel’s destruction.

“Everyone knows where that money is going to go ultimately,” said Netanyahu’s agriculture minister, Uri Ariel.

But in comments to reporters before traveling to Paris, Netanyahu said it was a “question of alternatives.” He said the step was coordinated with security officials to restore quiet for Israeli citizens living near the Gaza border and to avert a humanitarian crisis.

Later, at a press conference in Paris, when asked about his longer-term vision for Gaza, Netanyahu said there could be no political resolution as long as Hamas is in power.

“You can’t have a political resolution with those who are committed to your dissolution, to your destruction. That’s absurd,” he said. The alternative is to “do the minimal things necessary to maintain our security and to prevent the collapse of the humanitarian situation,” he added.

The payment is part of what is expected to be a set of informal understandings between Israel and Hamas reached through Egyptian and U.N. mediation.

Hamas is demanding an expansion of the permissible fishing zone off the Israeli-controlled Gaza coast, uninterrupted flow of fuel to mitigate chronic power shortages and the lifting of Israeli restrictions on exports and imports. In return, Israel wants quiet and an end to the border protests.

For the second week in a row, the Palestinians kept Friday’s protests carefully restrained, burning fewer tires and refraining from breaching the fence.

In the West Bank, Abbas angrily accused Israel and the U.S. of ganging up behind his back to entrench Hamas’ control over Gaza. He also accused Hamas of undermining his goal of establishing an independent Palestinian state that includes all of the West Bank and the Gaza Strip.

Abbas fears that the U.S. is preparing to float a peace plan, called the “Deal of the Century” by President Donald Trump, which would leave Hamas in control of Gaza and give him only limited autonomy in pieces of the West Bank.

“We are going to take tough measures (against Hamas) in the coming days,” Abbas said.

Abbas, speaking at a ceremony marking the 14th anniversary of the death of Palestinian leader Yasser Arafat, did not elaborate on what steps he might take against Hamas.

Abbas has repeatedly limited financial aid to Gaza in order to pressure Hamas into returning control to him.