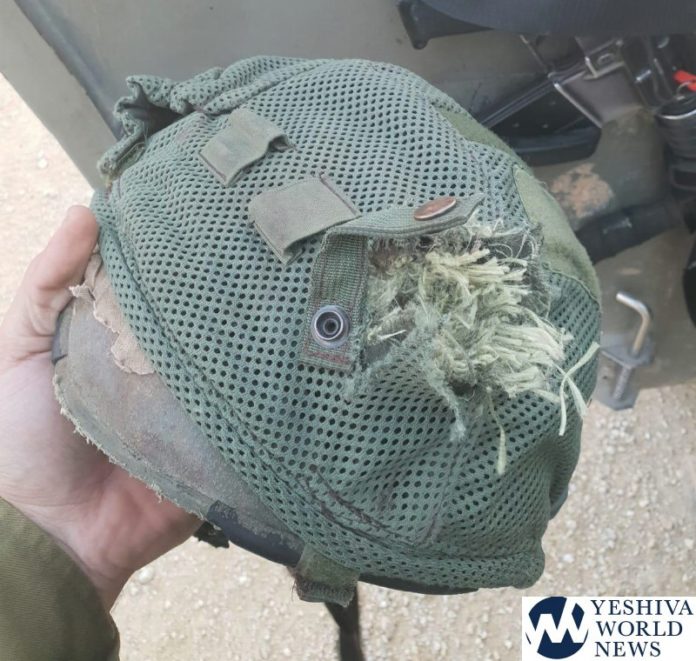 An IDF Officer sustained a gunshot wound from a Gaza sniper, Tuesday afternoon.

The IDF confirmed the incident saying that soldiers were operating at a riot along the Gaza border fence near the Kissufim crossing when the attack occurred.

Shortly before the shooting, terrorists broke through the security fence, sabotaged military equipment, and returned to the Gaza Strip.

The officer, who is a brigade commander for the Paratroopers, had his life saved by his helmet, which stopped a bullet fired during the violent riot.

He was was evacuated to Soroka Hospital in stable condition.

Moments later, loud explosions could be heard in Gaza, as the IDF retaliated against Hamas Terror positions. One terrorist was reportedly killed.

Following the incident, Israel said it would halt a key transfer of $15 million in Qatari funds to Hamas in Gaza. Prime Minister Netanyahu has previously stipulated that the cash injection was contingent upon calm along the Gaza border.

An IDF spokesperson stated: “An IDF tank attacked an observation post belonging to the Hamas terrorist organization after an IDF officer was lightly injured in a disturbance in the southern Gaza Strip, which included the throwing of stones at IDF forces. The circumstances of the injury are under investigation.”

The IDF later released an additional statement: “Following the earlier investigation, a preliminary investigation revealed that during a riot involving stone throwing, a terrorist opened fire at IDF soldiers, one of whom was lightly injured and was evacuated to the hospital.”

“In addition, five suspects approached the security fence in the southern Gaza Strip. Two of the suspects crossed into Israel and returned immediately to the Gaza Strip.”

Pictured: An IDF officer’s helmet after a terrorist in #Gaza shot at him during a riot on Israel’s border fence.

Also pictured: Proof that Hamas sends ARMED terrorists to attack Israelis, while surrounded by civilians and under the guise of “protests.” pic.twitter.com/RagElhYdHe