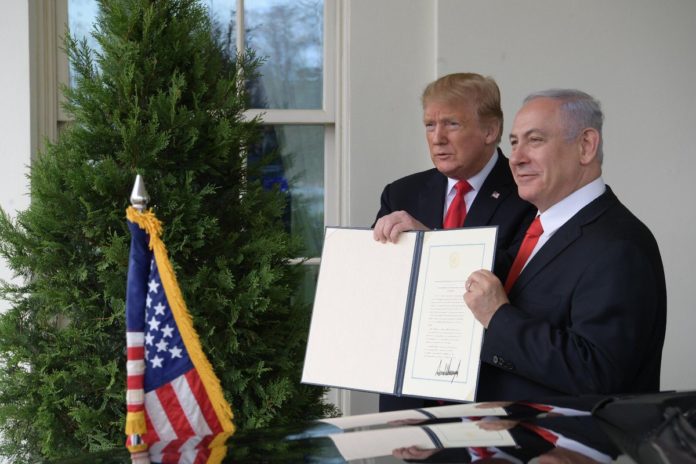 As YWN reported, President Donald Trump signed a proclamation on Monday recognizing Israel’s sovereignty over the Golan Heights, reversing more than a half-century of U.S. policy.

Standing alongside Israeli Prime Minister Benjamin Netanyahu at the White House, Trump made formal a move he announced in a tweet last week. The president said it was time for the U.S. to take the step after 52 years of Israeli control of the strategic highlands on the border with Syria.

Just as the event was ending, Netanyahu turned to Trump and said “Mr. President I brought you a case of the finest wines from the Golan. But I understand that you are not a very big wine drinker. Is it ok if I give it to your staff?”

Trump answer “yes”, to which Netanyahu immediately responded “I hope there won’t be any investigations over it!”

My friend President Trump signed an order recognizing Israeli sovereignty in the Golan Heights. A historic day for Israel! pic.twitter.com/dVAadIDxTH