President Donald Trump signed a proclamation on Monday recognizing Israel’s sovereignty over the Golan Heights, reversing more than a half-century of U.S. policy in the Middle East.

Standing alongside Israeli Prime Minister Benjamin Netanyahu at the White House, Trump made formal a move he announced in a surprise tweet last week.

The president said it was time for the U.S. to take the step after 52 years of Israeli control of the strategic highlands on the border with Syria. The U.S. is the first country to recognize Israel’s sovereignty over the Golan, which the rest of the international community regards as Israeli-occupied.

Syria and neighboring Lebanon denounced the move, and at least two NATO members, Canada and Turkey, said they would not follow suit.

Trump said his decision would cement the Jewish state’s ability to defend itself from regional threats should a broad Arab-Israeli peace deal ever be reached. Trump’s action also likely gives Netanyahu a political boost ahead of what’s expected to be a close Israeli election.

During his 90-minute visit to the White House, reporters and photographers were invited to see Netanyahu at least four times, including his arrival at the South Lawn and in the Oval Office.

Israel has long argued that the strategically important area has, for all practical purposes, been fully integrated into Israel since it was captured from Syria in the 1967 Mideast war and that control of the strategic plateau is needed as protection from Iran and its allies in Syria.

[BIBI CRACKS JOKE: Gifts Trump Case Of Wine From Golan, Hopes There “Won’t Be Any Investigation Over This!”]

“Today, aggressive acts by Iran and terrorist groups, including Hezbollah, in southern Syria continue to make the Golan Heights a potential launching ground for attacks on Israel,” Trump said in the proclamation.

The proclamation noted the “unique circumstances” presented by the Golan, language that appeared to be aimed at countering criticism that the recognition would be used by other countries to justify control of disputed territory, such as Russia’s 2014 annexation of Ukraine’s Crimea region.

But criticism was speedy and intense.

Syria slammed the U.S. step as “blatant aggression” on its sovereignty and territorial integrity. The foreign ministry said Trump’s move represented the “highest level of contempt for international legitimacy” and showed that Washington was “the main enemy” of Arabs.

Lebanon, which Secretary of State Mike Pence visited over the past weekend, said that the Golan Heights is “Syrian Arab” territory and that “no country can falsify history by transferring” land from one country to another.

“In accordance with international law, Canada does not recognize permanent Israeli control over the Golan Heights. Canada’s long-standing position remains unchanged,” the Canadian foreign ministry said. “Annexation of territory by force is prohibited under international law.”

Turkey’s foreign minister said that the U.S. had ignored international law and that the decision would further increase tensions in the region.

And, at the United Nations, U.N. spokesman Stephane Dujarric said U.N. chief Antonio Guterres adheres to Security Council resolutions that Israel’s annexation of the Golan Heights is “null and void and without international legal effect.”

Amnesty International called the decision “irresponsible, reckless and yet another example of the Trump administration violating international law and consensus by condoning Israel’s illegal annexation.”

Eric Goldstein, deputy Middle East and North Africa director at Human Rights Watch, said Trump seems to want to “drive a wrecking ball” through international law that protects the people who live in “occupied Golan Heights.” He said it could embolden other “occupying states to double down on their own land grabs, settlements and plunder of resources.”

Netanyahu, even as he was somberly cutting short his visit to Washington to deal with a rocket attack in central Israel, was elated by Trump’s move.

“Israel has never had a better friend than you,” he told the president.

Netanyahu noted a series of steps Trump has taken since assuming office, including his withdrawal from the 2015 Iran nuclear deal, recognition of Jerusalem as Israel’s capital and moving the U.S. Embassy there from Tel Aviv.

In addition to signaling U.S. support for Israel’s security, the decision appeared to show Trump’s support for Netanyahu, who is up for re-election April 9. Netanyahu is facing a tough challenge from a popular former military chief and reeling from a series of corruption allegations. He has repeatedly sought to focus attention on his foreign policy record and strong ties with Trump.

The two leaders met as the Israeli military was striking Hamas targets in the Gaza Strip in response to a rocket that hit a house north of Tel Aviv, injuring seven people.

In a speech to the American Israel Public Affairs Committee earlier Monday, Vice President Mike Pence said the rocket attack “proves that Hamas is not a partner for peace.” Pence told AIPAC that “Hamas is a terrorist organization that seeks the destruction of Israel, and the United States will never negotiate with terrorist Hamas.”

Netanyahu arrived in Washington on Sunday for what was to have been a three-day visit but announced early Monday he would leave early to take charge of the response to the rocket. 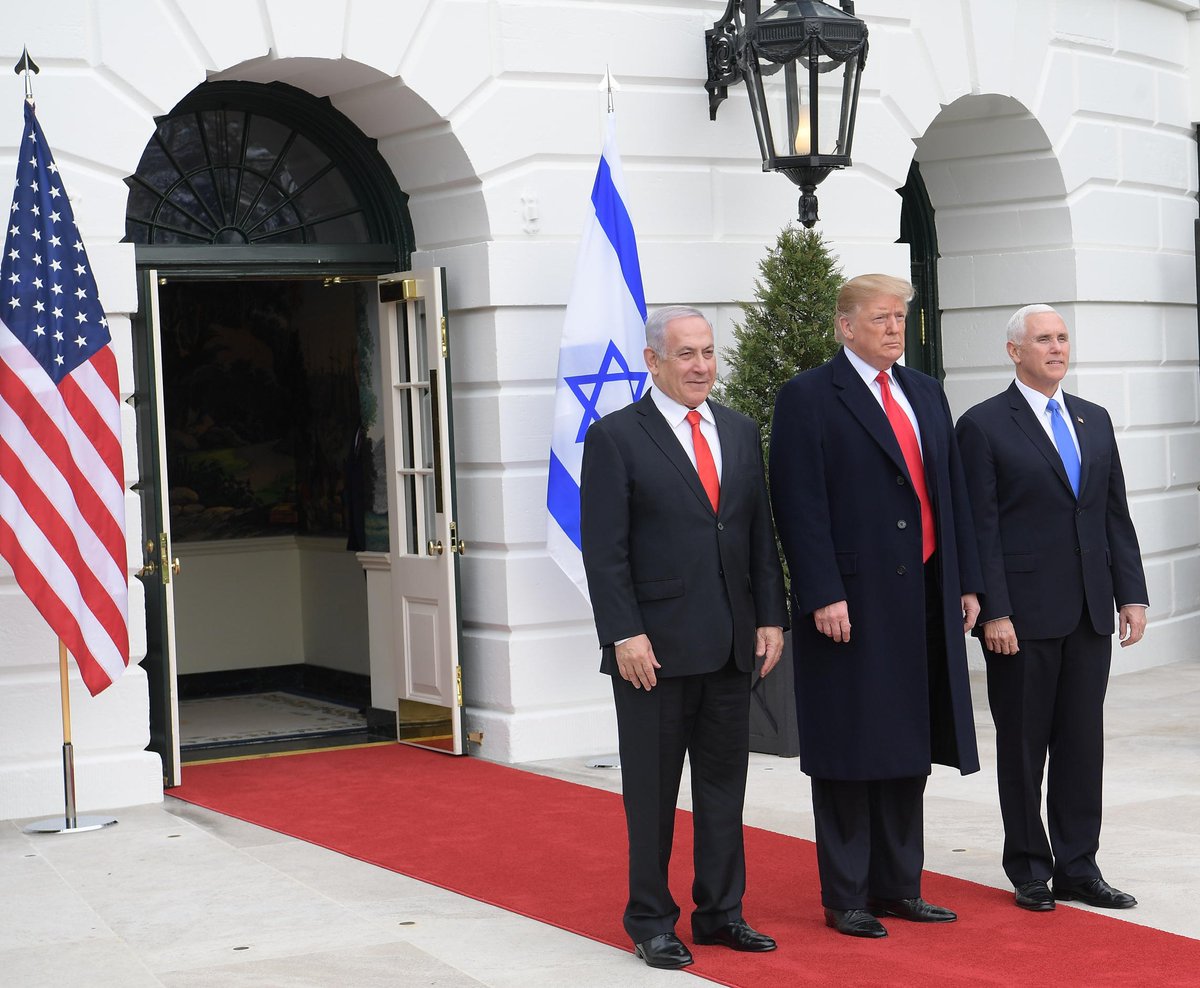 PM Netanyahu: "Your proclamation comes at a time when the Golan is more important than ever for our security, when Iran is trying to establish bases in Syria to strike at Israel. From across the border in Syria, Iran launched drones into our airspace, missiles into our territory" pic.twitter.com/H3KUCQPIqQ

The Golan has been Jewish land for thousands of years. It is mentioned in the Bible as the land of the tribe of Menashe (Manasseh).

1500 years ago there were many Jewish towns and villages in the Golan. These are the remains of some of their synagogues. pic.twitter.com/9ZT3ZdiENA

My friend President Trump signed an order recognizing Israeli sovereignty in the Golan Heights. A historic day for Israel! pic.twitter.com/dVAadIDxTH

A Criminal Case… Against a Shlucha?

GET OUT: Rep. Lawler Says Ilhan Omar Has Only Herself to...

ABSURD: Attorney-General To Netanyahu: “You Can’t Be Involved In Legal Reforms...