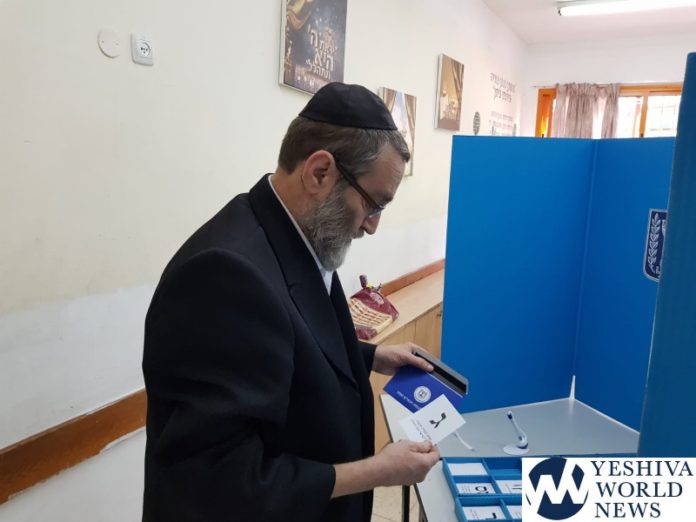 For most of the nation, voters believed that the results announced last week by the Central Elections Committee were final. However, almost immediately thereafter, Naftali Bennet of “New Right” learned his party was less than 1400 votes from the minimum threshold. Yahadut Hatorah heard the bad news, that it lost a seat after the 270,000 votes of soldiers, hospitals and prisons were tabulated, now aware it is 200 votes short of that eighth seat.

But now, Justice Chanan Meltzer has announced the “final results” will be announced this Wednesday, April 17, 2019 as too many discrepancies have been documented to be ignored. Hence, all the results are more or less accurate, but not yet final.

Yahadut Hatorah is confident it will gain back the eighth seat as well as Bennet expressing cautious optimism regarding his effort to get into Knesset.

There are many discrepancies. One interesting one is that in Yishuv Itamar for example, the Central Election Committee reports 52 votes for Hadash-Ta’al, the party of MK Dr. Ahmed Tibi. Another interesting result is in Ashdod, where there are inconsistencies as the poll watchers from the various parties explain when a polling station received a certain percentage for chareidi parties every election, they want to know why has that number fallen suddenly in this election.

Persons in the know affiliated with Yahadut Hatorah feel that at the end, they will have the eighth seat returned. Experts report that the checking of votes in polling stations and continuing the work until Wednesday may indeed result in the shifting of a seat or two in some of the parties.

Meanwhile, the claims of the New Right party headed by Naftali Bennet and Ayelet Shaked received a harsh response from the Central Elections Committee.

“The Central Elections Committee wishes to clarify that it views with great severity the dissemination of the misrepresentation by New Right, that there were irregularities in the counting of votes in the double envelopes,” the committee said in a statement released on Sunday. The committee is permitting representatives of New Right to review material from special polling stations, a move which is most unusual and outside the letter of the law.

Since the elections, the New Right party has launched a special war room in which dozens of activists are gathered and examine the minutes and details from the tabulation of votes, claiming that some of the proceedings were against the regulations.

New Right claims, for example, that some of the double envelopes were opened without documentation of their number in the protocols, in addition, a stop in the counting of votes was not recorded and other arguments showing protocol was breached.

Interestingly, former coalition chairman Likud MK David Bitan told Ynet on Sunday morning that if he were Prime Minister Binyamin Netanyahu, he would appoint Ayelet Shaked as Justice Minister for Likud. He added that she made a major error by following Bennet to the New Right party instead of moving to Likud.

When asked about the possibility of a coalition government, Bitan explained “regarding the Blue and White party, there is no one to speak to”.