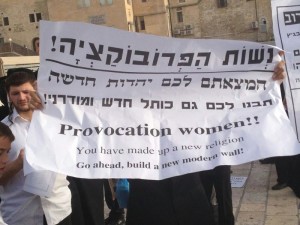 09:26 IL:
Many chareidim report that police literally closed the gates, prohibiting many from making their way to the Kosel to take part in the protest against the WoW group. Police apparently decided to limit the number of chareidi dressed men permitted into the Kosel area during the WoW group’s presence to avoid a repeat of last month’s violence. Many angry persons who are counted among those barred from entering the area condemned the actions of police, closing the Kosel on a rosh chodesh morning all in the name of accommodating the women, whose actions they view as provocative.

About 400 women entered the area cordoned off by police for the WoW, who recited Hallel and other tefilos amid jeers and shouts from nearby chareidi protestors. One man who showed solidarity with the WoW group was attacked by chareidim, pulled to safety by police unharmed.

The women were not permitted to bring a Sefer Torah with them as they wished, compelled to read from a Chumash. The event ended without any major confrontations. A number of chareidim did get into a pushing match with police after the women left the area. Police detained some of them for questioning.

Kosel Rav Rabbi Shmuel Rabinowitz stated “I condemn violence or a demonstration of any kind at the Kosel, and hereby appeals to all parties to do everything to find a solution to the dispute in the future that adds honor to the holy place and the entire People of Israel.”

08:05 IL:
With hundreds of women participating in the WoW Rosh Chodesh service at the Kosel, the Reform Movement has released a statement that this “represents a new dawn for the WoW struggle at the Kosel as well as showing the failure of the chareidi community’s battle.”

07:50 IL:
The overwhelming majority of the 200 plus women opting to join in the WoW prayer event are not in tallis or tefilin, and in fact, those wearing them number a mere handful. The media remains on the scene, focused on the chareidi protest, which has waned somewhat.

The women’s group is surrounded by female police and border police, with male policemen stationed at a distance along with a sizable contingent of Yassam commando troops on alert to respond to any confrontation. A police helicopter makes a pass overhead.

07:44 IL:
At this point the cameras remain focused on the chareidim, perhaps waiting for action to begin. A number of rabbonim have suggested to the chareidi protestors to return to the yeshivos and limud instead of wasting time with the women. The women are holding their event in the ezras noshim.

One might argue that if not for the chareidi protest, the event would not be deemed newsworthy and the women would come and go without any media coverage.

07:37 IL:
The Women of the Wall (WoW) event appears to be passing without confrontation, which was the case last month. The small number of chareidim is distanced from the women, and the former continue holding signs accusing the women of desecrating the holy site with their actions.

The WoW are caged off to the side of the ezras noshim by police barricades but from their perspective, they are pleased with the media coverage and the fact that they are no longer arrested for holding their monthly prayer service, which has grown tenfold since the court’s decision permitting them to remain in the ezras noshim instead of Robinson’s Arch.

07:26 IL: Hundreds of chareidim are on hand at the Kosel, some holding signs against the Women of the Wall. The women were greeted with the signs and chants against their presence by the frum tzibur which at present numbers far less than the “thousands” expected to attend.

7:20 IL: The controversy surrounding the Women of the Wall organization appears to have compelled supporters to join in as they arrive at the Kosel this morning, Sunday,2 Rosh Chodesh Tammuz 5773, numbering over 200 women. The women are under heavy police guard, escorted as a group to the ezras noshim, caged into an area to prevent violence against them.

The recent Jerusalem District Court decision permitting the women to daven in the ezras noshim of the Kosel in tallis and tefilin appears to have has given the organization renewed vigor after decades of being legally banned to nearby Robinson’s Arch.

Thousands of chareidi mispallalim are expected as well, to show the international community that the majority of visitors to the Kosel are still affiliated with Orthodox Jewry and its adherence to tradition. Last month, a small number of chareidim turned violent and began attacking the women and police, resulting in negative reports in the media. Rabbonim shlita have called on the frum community to act as one should at the Kosel and to refrain from engaging in any type of altercation with the Women of the Wall.