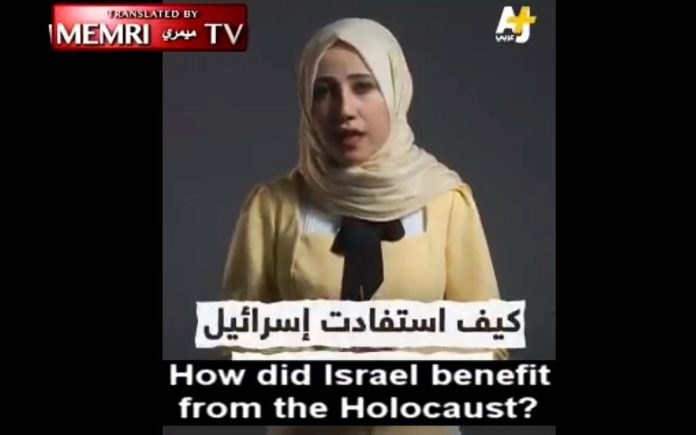 Al Jazeera suspended two “journalists” for producing a video that claimed the Zionist movement “benefited” from the Holocaust and that Jewish people “exaggerated” the outcome.

“The victims of the Nazis, who were following Hitler’s orders, exceeded 20 million people. The Jews were part of them. So why is there a focus only on them?” the video asks.

“The number of the victims of the Holocaust remains one of the most prominent historical debates to this day,” the video’s narrator said.

The now-deleted video was published to the Qatar-based company’s AJ+, a digital Arabic news organization. It was re-posted with English translation by MEMRI (Middle East Media Research Institute).

“Al Jazeera continues to adhere to the journalistic values of honesty, courage, fairness, balance, independence, credibility and diversity. In addition, the network recognizes the diversity in societies with all races, cultures, beliefs and their values and intrinsic individualities,” the network said in the statement.

It should be noted that in the past, frequent accusations have been leveled at the network for distorted coverage against the State of Israel and the Jewish people.

The director of Al Jazeera Plus, Dima Khatib, said that the program was produced without due consideration and added that major steps were being taken to ensure that all productions are properly edited. She called on all correspondents and editors to adhere to the network’s rules of ethics and editing.

“This was a grave incident in which a television station attacked the memory of the Holocaust and presented the Jewish people as using the Holocaust for its own purposes. The GPO will continue to stand guard and to ensure that global media coverage meets professional standards and faithfully reflects reality on the ground without distortion, tendentiousness and reportage not based on the facts.”

2/2 Holocaust Denial on Al-Jazeera Network: Israel Is Biggest Winner from Holocaust; It Uses the Same Justification to Annihilate the Palestinians pic.twitter.com/BMb25DYFTY