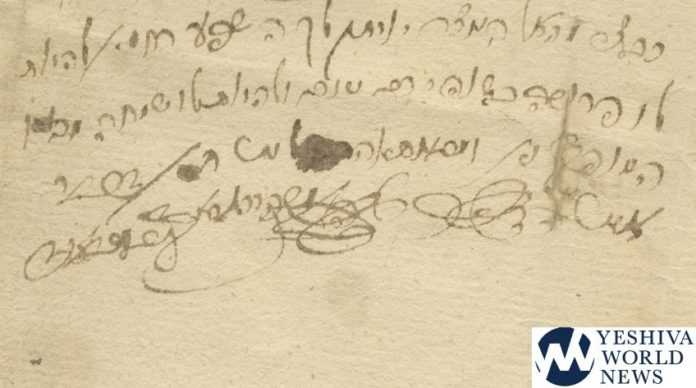 A previously unknown manuscript written by one of the illustrious Chassidic Rebbes HaRav Moshe Leib of Sassov, who was a disciple of the hailed Rebbe Elimelech of Lizhensk and teacher of the Yid Hakadosh of Peschischa was revealed several weeks ago in Jerusalem and will be put up for auction in two days. This is one of the only known manuscripts extant in the world that was handwritten by the venerable Harav Moshe Leib Sassover, ZT”L.

Nearly a century ago, Harav Moshe Leib’s grandson HaRav Nechemia Shapiro explained the scarcity of his ancestor’s manuscripts in his foreword to Chiddushei Ramal (Vienna 1920): “…The paper my grandfather wrote on and the ink he used were not good at all, and his handwriting was beautiful and fine. After being handled by many who did not know how to treat this treasure with the respect it was due and weren’t cautious to avoid touching it with their hands, and especially with unclean hands, the manuscript became very faded and torn, and over time it became so damaged that there was not even one complete, undamaged statement left on it.” Further in the foreword, he relates that once, when the manuscripts were in the care of Rav Moshe Leib’s son HaRav Yekusiel Shmelke, “A lit candle fell on the manuscript… and several complete leaves of it were destroyed…”.

The manuscript was delivered recently to the Kedem Auction House in Jerusalem by a descendant of Harav Moshe Leib Sassover, HaRav Shimon Shmelke Erblich of Antwerp, who is a seventh-generation ben achar ben (direct male descendant) of Rav Moshe Leib, whose last name was also Erblich. At Kedem Auction House, the estimate is that the manuscript will sell for approximately a half-million dollars.

The manuscript encompasses ten handwritten lines and Rav Moshe Leib’s autograph. On the verso of the leaf are another three handwritten lines, “To the Zalozitz community, to my friend the outstanding rabbi R’ Yaakov, from the Sassov community.” This letter also mentions a different letter sent from the Apta community “from his brother-in-law, the outstanding rabbi, the leader R’ Dovid.” Rav Moshe Leib then extends his blessings for livelihood and nachas from his children: “And due to lack of spare time, I shall be brief…And may G-d grant you an abundance of mercy for easy livelihood and much goodness, and to experience joy from his outstanding sons and daughters.”

A prominent Chassidic leader and luminary, HaRav Moshe Yehuda Leib Erblich of Sassov (1745-1807), was a close disciple of Rav Shmelke of Nickelsburg and studied in his yeshiva for seven years. Following his mentor’s passing in 1778, he began frequenting the court of Rav Elimelech of Lizhensk. In the late 1770s and early 1780s, he lived for several years in Apta, where he founded a yeshiva and delivered profound, in-depth shiurim. In those years, he drew the Yehudi HaKadosh of Peshischa to Chassidus. Rav Moshe Leib was renowned as a pillar of chessed in his generation, and most of the stories recounted about him highlight this remarkable trait. One of his most famous adages was, “If you are not a faithful lover of Yisrael, then you haven’t tasted fear of Hashem.”

Meron Eren, co-owner of Kedem Auction House in Jerusalem notes that “This is one of the only extant manuscripts of one of the greatest Chassidic masters of all time, and its focus on blessing, livelihood and nachas from one’s children turns it into an invaluable treasure for Jews around the world.” 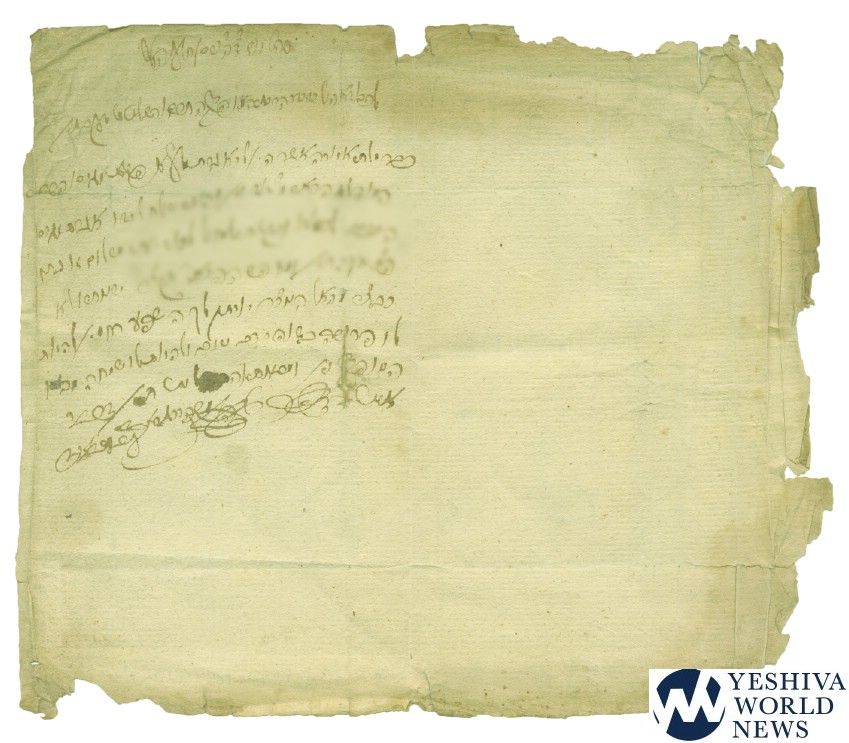