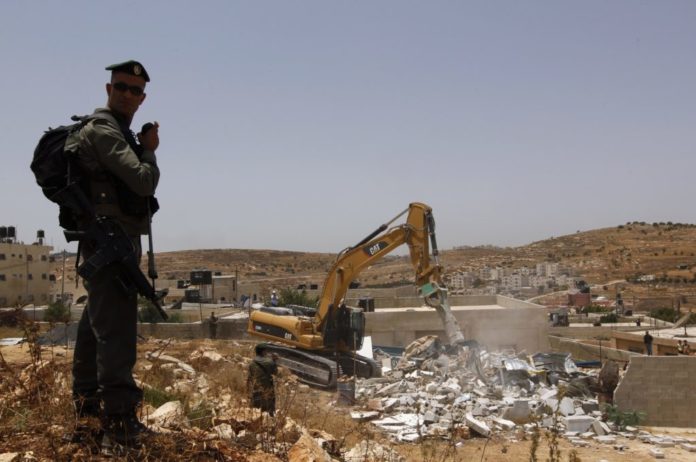 In line with a decision from the High Court of Justice, the IDF will begin demolishing illegal structures in the eastern capital near the eastern border gate of the city.

Security forces began operating during the early morning hours on Monday, July 22, 2019, towards executing demolition orders in Wadi Hummus, near the Arab Sur Bahir neighborhood in the capital. The demolition of 12 structures, home to 72 apartments adjacent to the border fence, was approved by the nation’s highest court. The court pointed out the structures pose a security compromise due to their proximity to the border fence.

Eleven of the structures in question are currently building shells in the construction process while the twelfth is occupied by Arab families. The IDF’s Yahalom unit is carrying out the demolitions along with construction equipment form the Combat Engineering Corps, with the latter also handling explosives.

Following the legal battle, the court approved the demolitions of the 12 buildings, which are situated between Oslo-designated areas ‘B’ and ‘A’, with the former being under Israeli security and PA (Palestinian Authority) civil control and the latter under exclusive PA control.

Minister of Public Security Gilad Erdan stated: “The demolition of the illegal and mostly uninhabited buildings which takes place today at ‎Wadi Hummus in the village of Sur Bahir, Jerusalem, was approved by the Israeli High Court of Justice, which ruled that the illegal construction constitutes a severe security threat and can provide cover to suicide bombers and other terrorists hiding among civilian population and endanger the lives of civilians and security forces alike. The court also ruled unequivocally that those who built houses in the area of the security fence, knew that building in that area was prohibited, and took the law into their own hands.”

MK (Hadash-Ta’al) Ofer Cassif responded to the demolitions with the following statement: “At this time, another Israeli war crime is taking place – the massive destruction in Wadi Hummus in Sur Baher, the expulsion of persons from their homes and throwing them into the streets, leaving them without means.

“Let us not say, not with confidence, but with humiliation for its own sake, whose ultimate goal is the expulsion of the Palestinian natives from heir lands and their ‘Judaization’. A chilling racist crime”.

It is added that Cassif turned to COGAT (Coordinator of Government Activities in the Territories) Major-General Kamil Abu Rokon and Defense Minister Binyamin Netanyahu last week, but he did not receive a response.