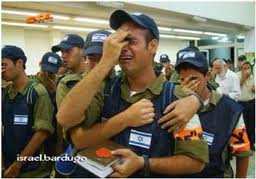 Once again, MK Elazar Stern is at the heart of the storm, succeeding in eliciting anger and outrage among many. In his remarks on Wednesday, 25 Tammuz 5773 in Knesset, a special session marking eight years since the expulsion of the Gush Katif communities, he called that enterprise “a failure”.

Stern differentiated between the settlements found throughout Yehuda & Shomron and those in Gaza. He feels that while many were attracted to Yehuda and Shomron the same pioneering spirit never really reached Gaza and that settlement enterprise was a colossal failure. “In Gush Katif there were 8,000-9,000 people. That is what the country managed to bring in 30 years?”

At the time of the expulsion Stern was a major-general in the IDF, serving as the head of the Personnel Branch. He stated that at the time he could not really know just what difficulties the expellees would endure as a result, but even if he would have known, he would have nonetheless fulfilled orders, albeit with a heavy heart.

Representatives of the former Gush Katif communities responded in anger, stating the community of Gush Katif was heterogeneous, a wonderful mix of religious and non-religious, which he praised. The community had a special spirit which continues today, citing how the frum and non-frum lived side-by-side without ethnic distinction, Sephardim and Ashkenazim melding together into a tightly knit community. They praised the unprecedented farming successes and how 390 farmers worked 4,400 duman (1,100 acres) of farm land, yet they provided 10% of the nation’s agricultural yield. They cite the gush provided 65% of the nation’s organic crops and a sizable percentage of the flower industry, not to mention the entire enterprise of the bug-free greens to satisfy kashrus demands.

Many are angered by Stern’s words, which they view as simply pouring salt on the wound of the 9,500 plus former residents of that area, many still struggling to rebuild their lives to this day.

For visitors and residents of Israel interested in seeing just what Gush Katif was, one may visit the Gush Katif Museum located in the center of Jerusalem, near Machane Yehuda.