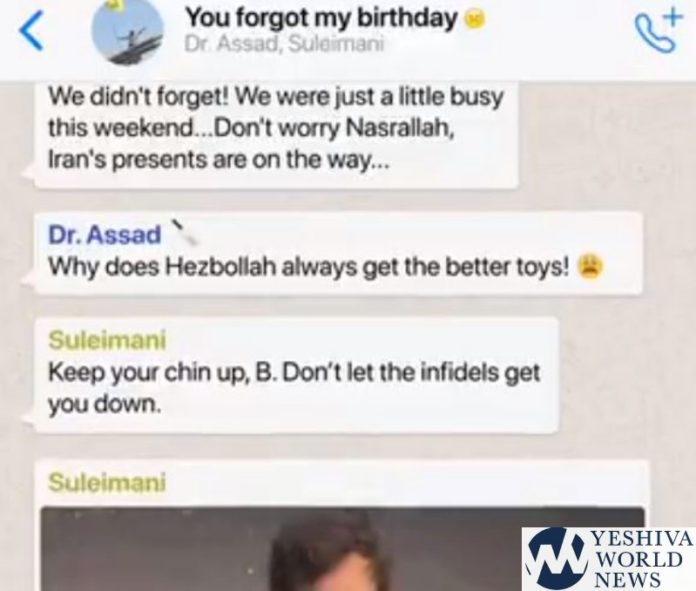 “It was Hezbollah leader Hassan Nasrallah’s birthday on Saturday and he thought no one remembered,” the IDF tweet said. “Don’t worry, we did!”

The tweet features a mock WhatsApp conversation between Nasrallah and Syrian leader Bashar Assad and Iranian Revolutionary Guard Corps’ Quds Force commander Gen. Qassem Suleimani, with Nasrallah complaining to the two men that they forgot his birthday. Suleimani quickly responds: “We didn’t forget! We were just a little busy this weekend… Don’t worry Nasrallah, Iran’s presents are on the way…”

Assad whines: “Why does Hezbollah always get the better toys! Suleimani tries to reassure him “Keep your chin up, B. Don’t let the infidels get you down.”

The disgruntled Assad directs a gibe at Nasrallah by wishing him: “Happy Bday, Bunker boy!” Nasrallah shows his appreciation to his cronies, “Thanks boys, your friendship means the region to me.”

Don’t worry, we did! 🥳 pic.twitter.com/pXIASfJSnt

Suleimani acknowledges his thanks but also can’t resist mocking Nasrallah for his trouble with Israel, “Unfortunately some of your gifts didn’t make it all the way to you in Lebanon.”

Nasrallah happily anticipates the presents his friends promise him are on the way, anticipating Type 36 rocket launchers, long-range missiles, and what he most hopes for, precision-guided missiles.

Putting satire aside, the IDF video ends with a somber message: “Iran needs to stop arming Hezbollah in Lebanon. The people of Lebanon deserve a gift. Freedom from Hezbollah.”

Earlier on Tuesday, the IDF announced that Hezbollah has established a production and conversion facility for precision missiles in the Bekaa Valley in southern Lebanon.

The IDF stated that the facility was established several years ago by Iran and Hezbollah for the production of weapons, including special machines for the manufacture of missile components for missiles capable of striking targets within 10 meters away.

“This facility is extremely important to the Hezbollah precision-missile project, which is why Hezbollah, fearing strikes, evacuated valuable and unique equipment from the facility to civilian locations in Beirut,” the IDF said, adding that Iran provides the funding, machinery and training for the Lebanon facility.