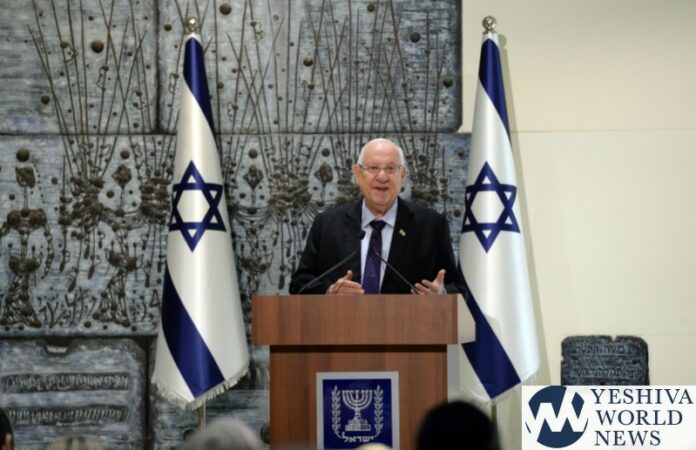 As happens every year at this time of the year, President Reuven Rivlin on Thursday hosted a seminar day on the question of judicial pardons at Beit HaNasi, the official President’s Residence. This year, the seminar looked at the framework for pardons that was announced for Israel’s 70th anniversary and recent legislative developments. As well as the president, Director-General of Beit HaNasi Harel Tubi, Legal Advisor to the President Udit Corinaldi-Sirkis and head of the pardons department at the Ministry of Justice Nochi Politis spoke at the seminar.

In his remarks, the president referred to the release of Simona Mory from prison last week, following a decision of the parole board and with the support of the State Attorney’s Office. Mory was convicted of murdering her husband who had brutally abused her for many years.

The president noted that the objective of judicial pardons is “to review our correct decisions, to give the possibility of an additional point of view and to give an opportunity to those who seek to change their ways. Doubts and loves are what allow us to forgive, but also to ask for forgiveness. As we say in the ‘Adon Haselichos’ tefilla at this time of year, ‘we have sinned, we have betrayed, we have turned away, we have transgressed – we beseech You to have mercy on us.’ Asking for forgiveness and seeking absolution are two sides of the same coin and the essence of humanity. As a society, we are measured by our ability to question our own judgements, as well as by our ability to forgive and to pardon those who need it and deserve it. The president’s authority to pardon gives practical and concrete meaning to those ideas. And so, in the matter of Simona Mory when her sentence was commuted by a presidential pardon, the grim reality of her life was taken into consideration. Pardons are a unique and important tool that complement the work of the judiciary.”

Speaking about the framework as part of which 590 pardon requests were submitted for commuting prison sentences, reduction of fines and deletion of criminal records for soldiers and those performing national service to mark Israel’s 70th anniversary, the president said, “this framework was intended as important message to Israelis, that a just society bears responsibility not only for its successes and issues of national concern, but also for those on the fringes, those who are made mistakes and received punishment and who may now need mercy and compassion. The power of pardon also includes the possibility of deleting criminal records. It enables people to complete a process of rehabilitation and to turn a new page. Many young people whose criminal records are deleted as part of their pardon put their criminal past behind them, becoming adult citizens who contribute to society and the community.”

As part of the seminar, Naftali Yaabetz told his personal story. Yaabetz, who now heads the corrections department at the Ministry of Labor & Social Affairs was one of nine children of a chareidi family who suffered sexual abuse and left the frum community at the age of 15. Thrown out of home by his parents and as a young person living on the streets of Jerusalem, he rejected the help of social workers. He began dealing drugs and was arrested at the age of 17 and faced 14 different criminal cases. After his release from prison, he began to rebuild his life. As part of his rehabilitation, he received a pardon and deletion of his criminal record from the ninth President of Israel, Shimon Peres, becoming a social worker himself and later taking up his current role at the Ministry of Labor & Social Affairs.