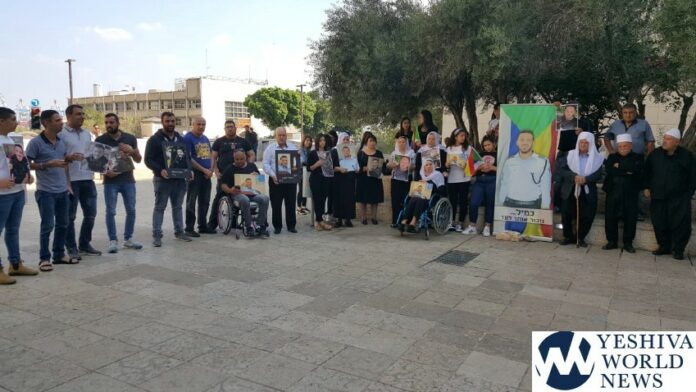 Dozens of demonstrators gathered today outside the Haifa Magistrate’s Court to protest the sentence handed to terrorist Amjad Jabareen, an Arab-Israeli accomplice to the 2017 terror attack on Har Habayis.

Jabareen was sentenced by the court to 16 years in prison for serving as an accomplice to the terrorists who murdered Israeli-Druze police officers Hail Stawi and Kamil Shanan.

The protestors, which included members of the bereaved families and pro-Israel activists from the pro-Israel watchdog Im Tirtzu and the Forum for Zionist Thought, called for an appeal and demanded two life sentences for the terrorist, one for each slain police officer.

Former member of Knesset MK Shakib Shanan, father of Kamil Shanan, said: “We are here to cry out for the victims who are unable to do so themselves. Our blood is not cheap, and it will never be cheap.”

“The blood of all those who defend our land is holy,” said Yaakov, “and this disgraceful sentence tarnishes the memories of the fallen and paves the way for future attacks against our police officers.”

Tom Nisani, head of Im Tirtzu’s Education Division, said: “We joined the protest of the bereaved families to demand that this depraved terrorist finish his days in prison. A terrorist is a terrorist, whether or not he pulled the trigger or helped someone pull the trigger.”

“The blood of our Druse brother cries out from the ground,” Nisani added.