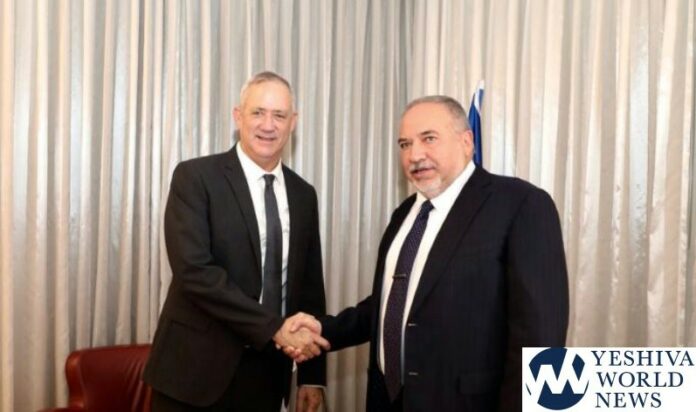 Following the meeting, Gantz once again expressed his desire to enter into a national unity coalition government based on President Reuven Rivlin’s plan, explaining that from his perspective, he will do everything possible within his abilities to make it work with Likud for as long as his demand pertaining to indictments against PM Netanyahu are honored. “I am willing to weigh every option” he added in a joint press conference with Lieberman at his side.

Gantz accuses Netanyahu of holding on to his right-wing bloc and working to drag the nation to a third round of Knesset elections.

“We plan to meet in the beginning of the week one more time,” Gantz added, explaining he has not given up on reaching agreement with Likud, and that preventing another round of elections remains paramount in his eyes.

Lieberman explained, “We exchanged ideas, but I am still waiting for a clear statement from all the leaders of Blue & White that they accept the president’s plan.”

Lieberman added that he told Blue & White that if the party reaches an agreement and forms a coalition with Likud and moves ahead to form a coalition without his party, he would add an additional eight mandates without asking anything in return.

In a directly related matter, the meeting planned for Thursday between Lieberman and Prime Minister Binyamin Netanyahu was canceled and another date will be set.

Most believe that of the four top persons in the party, Gantz, Yair Lapid, Moshe Ya’alon and Gabi Ashkenazi, Lapid remains adamantly opposed to sitting in a coalition with Likud for as long as Netanyahu remains at the helm. News13 however reports that the problem is Ya’alon, who refuses to enter into a coalition with Netanyahu because of the criminal investigations and possible criminal indictments against him that may follow, sharing Lapid’s position.

What is certain is that if a coalition agreement is not reached, the presidential mandate will expire next week regardless.