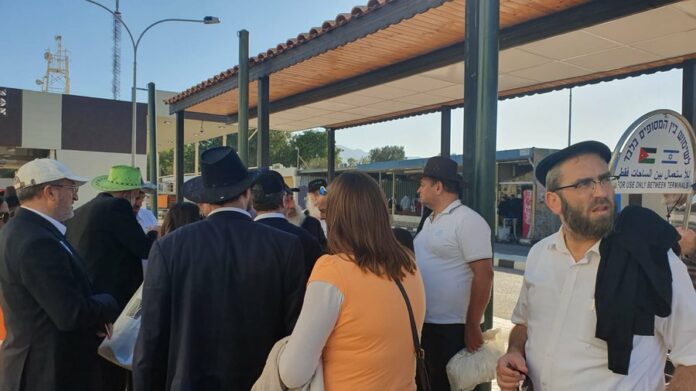 Almost 100 Israeli deputy mayors who were attending a conference in Eilat were scheduled for a tour of Petra, Jordan on Tuesday morning. Instead of enjoying the tour, most of the Israelis ended up returning to their hotel in Eilat in disgust after a two-hour delay and a blatant display of discrimination and anti-Semitism.

“At the first inspection, they asked the religious deputy mayors to take off their yarmulkes and put on hats,” Moshik Goldstein, Deputy Mayor of Givatayim told Yisrael Hayom. “When we finished the inspection, they took us all back because they realized that some of the religious members of the group were wearing tzitzios.”

“They took the whole group back for another inspection. The women who were wearing head coverings were taken aside and ordered to remove them.” Although the Jewish women were told that they had to be inspected due to their hair coverings, the Arab women (deputy mayors of Israeli Arab cities) who were wearing hijabs were allowed across the border without any inspection.

Meanwhile, the security guards told the religious men that they had to remove their tzitzis if they wanted to cross the border. Some of the men complied but most refused and decided to return to the hotel.

“After the second inspection, they again found something they didn’t like and asked to return the whole group for a third inspection,” Goldstein continued. “Our guide was told that they called Amman for approval and he has to sign that we’re going to Petra and nowhere else – and that we won’t display any religious symbols. This was the final straw. The atmosphere got very ugly and the hard feelings of the religious members of our group spoiled the atmosphere for us. As a sign of protest, we decided to return to Eilat.” Goldstein added that the first one to decide to abandon the tour and return to the hotel was a secular deputy minister, in commiseration with the humiliation of the religious members of the group.

Goldstein said that other people, such as groups of Ukrainians and South Koreans, were let in without inspection and they only stopped the Jewish group, which made them feel that the inspections were based on anti-Semitism. “It felt abusive, like we were being harassed and prevented from entering.”

“They asked us to remove every article that was symbolic of being Jewish,” one of the deputy mayors told Kikar Hashabat. “It’s a disgrace. There’s no other country in the world which demands this. We’re not ashamed of our Yahadus. We preferred not to enter Jordan.”

“We won’t remove our tzitzis even for a second,” Deputy Mayor of Ramle Maor Ashash added. “Everyone returned to the hotel – even the secular deputy mayors – in shock from the behavior of the Jordanians. We won’t relinquish our Jewish symbols.”

“This incident was reminiscent of dark periods of Jewish history,” said MK Michael Malchieli (Shas), who wrote a letter to Foreign Minister Yisrael Katz demanding that he convene an emergency meeting following the shameful incident.

Deputy Mayor of the Shomron, Davidi Ben-Tzion, wrote on Twitter: “Have you ever wondered what a ‘peace’ agreement looks like? Well, like this: For almost an hour and a half, almost 100 deputy mayors were detained on the Jordanian border crossing. Why? Because they caught one of them with tzitzit, Hashem yishmor. That’s how I like my ‘peace.'”

Interior Minister Aryeh Deri did not waste time contacting members of Israel’s Foreign Ministry and other relevant officials. Deri is now weighing a retaliatory move against workers from Jordan who wish to cross into Israel towards protecting Israeli tourists.

After Deri’s position was publicized, the Jordanians announced they are going to check the border crossing regulations regarding Israelis wearing a kippa and other religious symbols.