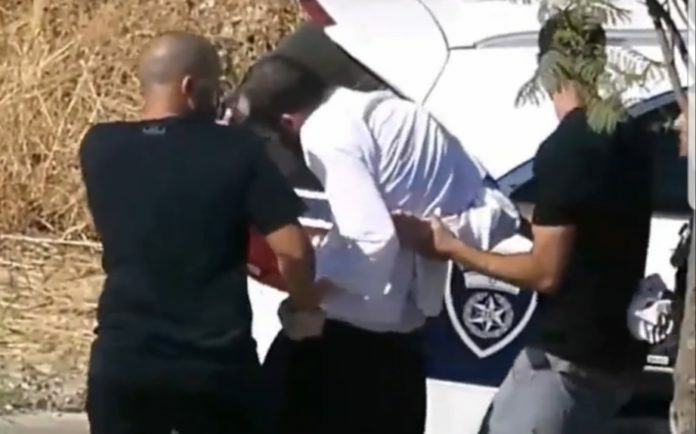 The Police Investigation Unit indicted the police officer who was videoed pulling a man by his payos in Beit Shemesh six months ago, Kikar Hashabat reported.

The incident occurred on a Friday afternoon, when Mordechai Kroizer, who was standing outside his building with his wife and children, saw something going on in the street. Some men were protesting against the destruction of an illegal shul. He moved closer to the area to see what was going on but he was still standing within the parking lot of his building when he was brutally attacked out of nowhere by a policeman who began beating him and then arrested him on suspicion of attacking a police officer. In an appalling scene of needless violence, a video shows Kroizner surrounded by four policemen dragging him while pulling his payos despite the fact that Kroizner didn’t even resist the arrest and his arms were being held by the policemen.

Kroizner was forced to spend Shabbos in jail and to make matters even worse, the policeman falsely reported to a police investigator that Kroizner had punched his face and injured his arms. He also falsely reported that the others at the protest physically attacked him when he arrested the plaintiff.

Due to the policeman’s lies, a criminal file was opened against Kroizner, and on Motzei Shabbos, the police requested to extend his arrest for five days. Luckily, someone in the community had videoed the incident, and once Kroizner’s lawyer got access to it and showed it to the court, he was released under certain conditions.

Kroizner told Kikar Shabbos: “I was standing with my wife and children next to the building of my house. I saw something going on and I went closer to the area but I was still within the parking lot of my building. The policeman fell on me and threw me to the ground. I don’t remember exactly what happened at those moments but he threw me and began to beat me and said: ‘You’ll die today, you’ll see what they’ll do to you.'”

“He pulled both of my payos. It was a humiliating and painful incident. If he would have pulled just a bit harder, he would have ripped my payos off completely. It was a miracle of miracles that everything was videoed. Until today my children still ask me where I was on the Shabbos they arrested me.”

The police officer was indicted for unlawfully assaulting the plaintiff and obstruction of justice for lying to the police investigator.

The indictment stated: “During a police operation in Beit Shemesh in July 2019, the officer grabbed the payos of the complainant and proceeded to drag him toward the police vehicle by pulling him by his payos.”

“On the same day, the defendant reported to a police investigator, in which he falsely stated that the complainant hit and punched his face, scratched his right arm and injured his left arm. The defendant also falsely stated that when he tried to arrest the complainant, the rest of the people there attacked him, kicked him and punched his head and other parts of his body.”

“In his actions described above, the defendant unlawfully attacked the complainant and deliberately obstructed justice.”

The Justice Ministry Police Investigation Unit has decided to file criminal charges against policeman Yaakov Sheetrit, who was seen during the past summer, in July 2019, pulling Yehoshua Mordechai Kroizer by his peyos while arresting him at a Beit Shemesh protest against tearing down a shul.

The unit investigated the incident, which received considerable notoriety due to the nature of the policeman’s actions, and investigators rejected Sheetrit’s contention that he used justifiable force, no more. The videos taken at the scene document that Sheetrit pulled Kroizer by his peyos as they took him to a police car, placing him under arrest.