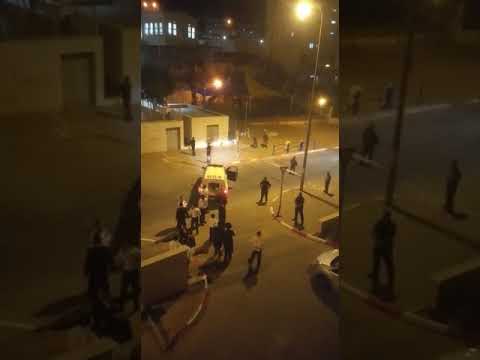 A large number of police officers gathered on Tuesday night in Beit Shemesh to ensure the safety of workers sent to tear down an illegally built Shul. Dozens of local Charedi men rushed to the scene once the workmen arrived and began throwing stones at the security forces and the workers. One officer was injured in the incident.

The city of Beit Shemesh issued a statement that said: “An understanding had been reached with Gabaim of the community who committed to leaving the building of their own accord without intervention on behalf of the city. The owners of the building even submitted a security deposit with the city to ensure the agreement. However, the owners together with the community decided to not honor their agreement, which left the city no choice but to bring in the police to ensure that the building gets taken down.”

A spokesperson for the city added: “The structure was erected on public land without any permits or allowances for the construction. The city does not wish to pursue altercations and therefore reached an agreement with the owners of the building, which stated that the owner would evacuate the building. In spite of continuous requests by the city for the owner to do so, the owner, unfortunately, decided to breach this agreement, which he himself signed and received a court order to uphold.”

A police spokesperson said: “A force of police officers accompanied representatives from the city to ensure the destruction of the structure that was built in an illegal fashion on land that belongs to the city of Beit Shemesh. Officers protected the city representatives and the hired workers who actually destroyed the building. Hundreds of rioters came to the location and began a violent protest which included throwing stones and other objects at the police. During the violence, one officer sustained a head injury and was taken to the hospital.

The police will continue work in order to ensure that legal directives and injunctions are carried out while safeguarding the public order and preventing any attempts to disrupt the injunction from being carried out. As part of this mission, we will make every effort to see that these rioters face justice.”