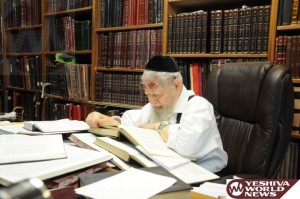 In an interview with Kikar Shabbos, Shas leader Aryeh Deri has harsh words for Prime Minister Binyamin Netanyahu and Bayit Yehudi leader Economy Minister Naftali Bennett. In the interview he spoke of the ongoing Knesset sessions to push through three bills, (1) Draft Bill, (2) Governance Bill and (3) Referendum Bill. The interview was conducted on Monday, 8 Adar II, the day before the Beit Shemesh Election.

Following are a number of excerpts from the interview:

Regarding the decision by the opposition to leave the plenum and hold independent sessions to delegitimize the pushing through of the three objectionable bills.

First of all, our voice is more audible as a result of the move. During these types of plenum sessions nothing really goes on but they will speak about our protest for years to come.

I see amazing Siyata Dishmaya as we, the chareidi MKs have been debating for some time regarding the draft bill and how to act. One of the votes was that the chareidi MKs would boycott the vote but even that would focus on the chareidim being the only ones to do so.

HKBH has arranged events that all 52 members of the opposition will not be part of the votes on all three bills, with is much better for us.

At a time when chareidi MKs are attacking Prime Minister Binyamin Netanyahu, Deri is among the few who remains silence, preferring to refrain from joining in.

Me? I was the first to attack Netanyahu. From the very beginning I said the prime minister is responsible for everything the chareidi community is enduring. I oppose attacking him and his wife personally.

Prime Minister Netanyahu is against the chareidi tzibur which handed him the government on more than one occasion. The very establishment of this coalition is a slap in a face to the chareidi tzibur regarding anti-religious legislation and more. I have no doubt the prime minister is responsible above all, and history will remember that Bibi’s government did what it did and all of the gezeiros.

Bayit Yehudi is no less responsible. It wishes to advance on the destruction of Torah. I tell myself and many others that we must go to the kever of Maran ZT”L and ask mechila, selicha and kapora for when Maran said Bayit Yehudi is a ‘house of goyim’ we were not comfortable with this in our hearts, and we said that perhaps it was a bit of an exaggeration. Today, we see just how far into the future Maran saw and how we are suffering.

Bayit Yehudi has caused significant destruction, particularly pertaining to giyur and the authority of the batei din, and now the draft law. People who are shomer Torah and Mitzvos extended a hand to the non-frum party like Yesh Atid, which is uprooting Torah. They are united in pact against us.

Regarding MK Ayelet Shaked to who headed the Shaked Committee:

Without a doubt she was not true to her word as we see regarding the inclusion of criminal sanctions in the draft law.

The biggest blow from them was the cut in yeshiva funding which was cut over 50% while they increased budgeting for hesder yeshivos. This is betrayal and it appears they wish to build on the churban of Torah – and we will not permit this.

What is your opinion regarding articles in Yated Neeman against yishuvim and citing they are a fiscal drain for the government.

[Responding in a happy tone] I am pleased Yated Neeman wrote this and that it is beginning to develop towards these areas too.

What about the Beit Shemesh Elections?

I am not certain regarding a victory. I am prepared for a defeat. Since this is the final battle for Mayor Moshe Abutbul, the entire chareidi tzibur has come out to support him. I am in the city daily and participate in election events and have done my best and given it my all towards a victory.

There are over 8,000 people in the old Beit Shemesh that did not participate in the voting in the first round. Eli Cohen and his people have been working there hard along with others.