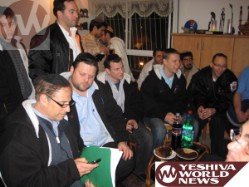 VIDEO LINK BELOW: Immediately upon landing from the exhausting flight from NY, our group of Hatzoloh paramedics and emt’s, drove to Pisgat Ze’ev to be Menachem Avel the Stern family, one of the many Mishpochas sitting shiva for their sons, lost this past week. The tragic observance of Shiva, all too familiar to the grieving parents of those killed in battle on behalf of Artzainu Hakidosha, is again repeating itself throughout Eretz Yisroel.

Nitai Stern Z”l, one of Klal Yisroel’s Kedoshim, was killed in Gaza. He was only 19.

As we somberly filed into the small apartment, the grieving family and the standing room only crowd took notice. Though strangers in appearance, we felt  bonded by something deeper.

How could anybody give real Nechama to heartbroken parents?

Nevertheless as many before us had attempted, we too tried.

Explaining that we came to Eretz Yisroel as a group from America to bring Chizuk and strength to those who may gain from it, Nitai’s  father and mother nodded their head in knowing acknowledgment. Their eyes were tired and swollen, their demeanor remarkably accepting. We began the ages old effort of Mitzvas Nichum Availim to the bereaved parents- as best we could.

When speaking to Nitai’s mother and father, I offered words of consolation by repeating a D’var Torah that my Rov, Rav Shimshon Sherer shlita said on last weeks parsha.

Why is the parsha called  Vayechi- the life of? Since the parsha  mostly deals with the preparation for and the death of- Yaakov Avinu, would it not have been more appropriate to call the parsha after its association with death-such as  Mesas Yaakov?

I applied the Rov’s answer to Nitai Z”l. Though the parsha indeed discusses the final preparation and expiration of Yaakov Avinu, the Torah defines how he lived his life, securing the Nitzchios, the eternity of Klal yisroel -long after his demise from this world.
Death is not the subject. Life lived correctly is Yaakov Avinu’s enduring legacy.

That future being crafted was and continues to be Klal Yisroel’s ascension into a mighty nation, worthy of carrying and transmitting the ideals of the Avos and Shivtai Koh and bedrocked in those same uncompromising principals.

Applying the lessons of the Parshas name to the Niftar Z”l, it was my hope that Nitai’s parents  be buoyed by the knowledge that his life and untimely death, enjoins him in the select group of Kedoshim who sacrificed their lives- Al kiddush hashem, to secure the perpetuation of Am Yisroel.

My insufficient words of comfort meant to convey, that while we sadly mourn Nitai’s death TOGETHER as one people, the lesson of Parshas Vayechi guarantee that Nitai’s valiant efforts- must and will live on forever.

Clasping each one of our hands, Mr. Stern silently allowed us to believe that perhaps we had indeed provided a glimmer of Nechama.

What gevurah. What sadness. Yet, the possibility of hope.
We should have no more tears.