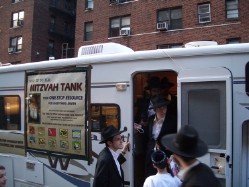 Due to debts amounting to over NIS 1 million, the Nazareth District Court has responded to a request to dismantle the organization responsible for the Chabad “Mitzvah Tanks” in Eretz Yisrael.

For over 40 years, the mitzvah tanks which consisted of mobile homes, vans and assorted vehicles, made their way to all points in Eretz Yisrael but of late, the organization based in Nazareth Illit has been having difficulties raising funds, leading to an inability to pay basic expenses, including rent to Danny Chananya, who called on the court to dismantle the organization to permit him to receive over NIS 1.1 million.

Chananya told the court that for the past eight years, since there was a ruling the organization needs to pay him, there were numerous petitions seeking to overturn the ruling, including to the Supreme Court, all of which were unsuccessful. Rav Dovid Nachshon, who runs the mitzvah tank operation in Eretz Yisrael, told the courts that most of the money owed was paid. He stated “it is no secret that regarding Chananya I personally feel we do not owe him anything but he does have a judicial decision on his side. The non-profit wanted to reach an understanding regarding payments, but we cannot pay at present and we are searching for donations”.

This week, the court ruled that in order to cover the debt, the non-profit will be dismantled. The court added that the heads of the organization admit they were not in compliance with the law, failing to submit the annual reports to the registrar of non-profits and other papers.

In response, Rav Nachshon stated, “the non-profit worked out payments with all creditors, with the exception of Mr. Chananya. He insisted that the organization be dismantled. Over half of the current debt is from accrued interest, but be that as it may, we have turned to a number of philanthropists in the hope of amassing the necessary funds. Whatever will be the outcome, the mitzvah tanks will continue their tradition of kiruv across the country among IDF soldiers, security agencies and women and children everywhere”.