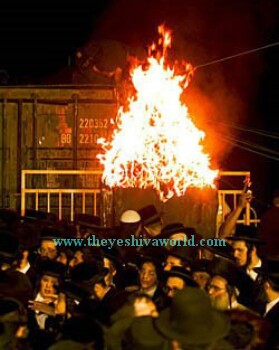 Police at midnight reported some 400,000 plus visitors already arrived in Mt Meron for Lag B’Omer, some present for the lighting of the main bonfire by the Boyaner Rebbe Shlita, others arriving a bit later. Some remaining overnight, while others preferring to leave to return home for shachris.

As the sunrise appeared imminent the shacris activity began, bringing the speakers that bellowed joy during the night to a temporary halt. The minyan perhaps marked the next phase of the celebrations, followed [for a first time I believe] by daf yomi aired nationwide, permitting residents of Eretz Yisrael to join in on the shiur from “The Mountain”, Kever Rashbi.

The chalakas are ongoing as is the flow of buses. People coming and going as The Mount is abuzz with activity. Shacris ends and the music once again comes to life as visitors and area residents are reminded, the special day is upon us, Lag B’Omer. Admorim and roshei yeshiva are expected to make their way to The Mount during the day, and many a tisch will be hosted as many of the tinokei shel beis rabon are ushered into an upsheirin. The Mount is ablaze with kedusha as simcha and torah resonate through the hills, all the result of the merit of Rav Shimon Bar Yochai ZY”A.

Unlike last year, there were words of praise for Israel Police and Egged, both apparently making good on promises to avoid the unfortunate scene that was last year’s celebration. Transportation arrangements appear orderly, no horror stories of riders waiting for buses that never arrived. Police appear to have the situation under control as they prepare for today’s arrival of tens and tens of thousands of visitors, all wishing to experience the special atmosphere that exists only at Kever Rashbi, only on Lag B’Omer.