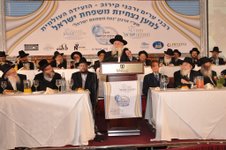 Jerusalem – It was by all accounts an unprecedented gathering of leading kiruv rabbonim from around the world, as well as rabbonim in cities and towns throughout Israel. The event took place from June 15 -17 at Jerusalem’s Inbal Hotel. The sponsor was the Eternal Jewish Family International, which is in the midst of a major global expansion of its activities to support rabbanim and batei din involved with intermarried couples who genuinely strive for a halachic conversion. It also assists kiruv organizations that are on the front lines in the fight against assimilation, such as the co-sponsors of the event:  Arachim, Ohr Somayach, Hidabroot, Lev L’achim, Shuvu, and Nefesh Yehudi. In the U.S., it also includes the Gateways organization.

The rabbanim deliberated on such topics as “Worldwide Assimilation: Today’s Spiritual Holocaust”, “Building Barriers Against Fictitious Conversions,” Anti-Semitism and Assimilation: Cause or Effect?”, and “Determining the Status of Certain ‘Jews’ in the Community.” The rabbanim, who represented numerous cities around the globe, expressed their deepest concern over the grave issue of world-wide assimilation.  In addition, they addressed a growing problem in Israel where many young people return from study abroad with non-Jewish spouses. Kiruv experts spoke of the dangers facing Israeli youth in Israel. They resolved to step up the educational efforts to hopefully thwart this growing trend.

The tone of the historic conference was set by EJF’s chairman, Menachem Yitzchak (Tom) Kaplan who noted that “in my wildest dreams I could not imagine such a rapid and broad acceptance by rabbanim all over the world of the vision we laid out with the help of the leading Torah authorities.” Kaplan said that he was “committed to do whatever it takes to take on assimilation and problematic conversions wherever the problem exists.” Rav Leib Tropper, the organization’s chairman of the Halachic Committee, spoke of the successes of EJF in “raising the bar on conversions and successfully uniting rabbonim and dayanim from disparate backgrounds in preserving kedushas yisroel.”

When the conference ended, there was a great sense of accomplishment in dealing with some of the most critical issues facing the Jewish nation. A new program called “Tochnit Kaplan” was warmly received. It will be a joint partnership between EJF and the kiruv organizations to include “straight talk” in their educational programs on the dangers of intermarriage. EJF will be co-sponsoring seminars around the world to promote this message. More than 300 Israeli rabbanim of cities and towns all over Israel signed on to a resolution that they will “intensely investigate” the halachic integrity of conversions before signing on a marriage certificate.