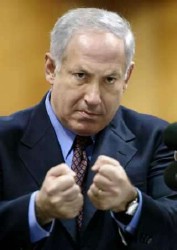 During his visit in Paris on Wednesday, Prime Minister Binyamin Netanyahu stated that if Israel learns of another incident in which Syria is moving weapons to Hizbullah, Jerusalem will act. The prime minister during his stopover in the French capital commented following the recent interception of the Francop weapons freighter that was intercepted by Israeli ‘Shayetet 13’ naval commandos.

The prime minister also called on Syria to enter into a direct diplomatic process with Israel, to launch negotiations towards reaching an agreement, stressing such a move must be without preconditions.

Syria has been maintaining its position, demanding a total and unconditional Israeli retreat from the entire Golan Heights as a precondition to entering into talks.

The prime minister made a stopover on his return flight from Washington, meeting with French President Nicolas Sarkozy.

The situation regarding Syria, Lebanon and Hizbullah is quite worrisome, pointing directly to Iran. The announcement this week that the new Lebanese government will include to Hizbullah cabinet ministers has Jerusalem concerned, realizing that the move lends legitimacy to the terror organization, while increasing Hizbullah/Syrian influence in the country, which some intelligence officials fear will permit the country to become another weapons storehouse for Iranian-supported terrorists, more than it already is, the direct result of Syrian influence.

Hizbullah did not permit the prime minister’s remarks regarding Syria to pass without a response, with the organization’s leader; Sheikh Hassan Nasrallah warning Israel it would bomb Tel Aviv is Israel makes a move to enter into Lebanon.

Just this week, IDF Chief of Staff Lt.-General Gabi Ashkenazi told a session of the Knesset Foreign Affairs & Defense Committee that Hizbullah has tens of thousands of rockets, some with a range of up to 325 kilometers, close to 200 miles.