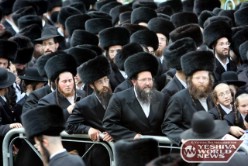 For those familiar with the Chabad community in Arad, a southern city, they are familiar the community is a modest one, some 50-60 families, about a fifth the size of the city’s Gur community, which according to the Chabadnikim, are seeking to bully their way towards control of Chabad mosdos.

This past shabbos did not pass quietly in Arad, but unlike in Ashdod and Betar Illit, where shabavnikim were the cause of the disturbances; according to the Chabad community leaders, in their community Gur Chassidim were responsible for the disturbances in the central shul, the mainstream chassidus, not juvenile delinquents. It appears the Gerrer Chassidim are not pleased with the recent merger agreement between the shul and Chabad, and elements in Gur are working to usurp the authority of the shul leaders, seeking to open the door to Gur.

In truth, the machlokes did not start this shabbos (Shemos), but a number of weeks earlier, with mispalalim attesting to the fact that Gerrer Chassidim attended tefillos and intentionally sang very loud, trying to drown out the niggunim of the chazzan, creating a most controversial atmosphere on the Shabbos Kodesh.

One mispalel, who agreed to be quoted on the condition of anonymity stated “I simply couldn’t daven this shabbos because of them,” calling the actions of the Gerrer Chassidim “a deliberate provocation.”

One woman explained she simply could not hear Rav Yaakov Mendelsohn when he recited haftorah because the Gerrer Chassidim were reciting it along with him, intentionally doing so in a very loud voice to create a disturbance. “The gabbai pounded on the bima and shouted at them, but of no avail. They continued intentionally disrupting the davening” Chana explained.

Chana, a resident, added in her statements to YWN-Israel that one mispalel, not a local resident, came to shul with a gun. She told him “we have no terrorists here” questioning why he came with a gun to shul on shabbos.

A group of Chabad woman was assaulted as a number of Gerrer Chassidim spat at them, including the widow of the former rav, Rabbi Bentzion Lipsker z”l and his daughter, Rav Mendelsohn’s wife, the current rebbitzin. As if this was not enough, one young girl was harassed, a four-year-old standing outside the shul, briskly high-stepping after her in an imitation of a Nazi goose-step, his black shoes barely missing the child’s face. A Chabad woman who saw the incident shouted at the man to leave the child alone. “He just smiled at me, it was outrageous!” she related.

The first incident of the morning was also the last straw for at least several men who lost their temper when the Gerrer Chassidim blocked a small girl from entering the men’s section to go to her father. The 3-year-old was pushed away from the door and told, “You can’t come in here.”

Other mispalalim tried to stop the Gerrer chossid; the dispute deteriorated into a fist fight that ended with a call by neighbors that brought police to the scene for the second time in less than a month.

If that were not enough, the shabbos violence resumed during the afternoon hours, when Gerrer Chassidim harassed Rav Mendelsohn by hissing at him along with shouts of “Reform” and “Sodomite”, this time shouting while kaddish was recited to prevent mispalalim from hearing the davening. Other words used by them cannot be repeated in this forum.

Adding to the rav’s pain were their defamatory shouts against his late father-in-law, the shul’s previous rav, reciting the rav’s name and then spitting on the ground. At mincha time, on shabbos, some of the Gerrer Chassidim removed the name tags from seats of mispalalim.

In actuality, the events of this past shabbos were somewhat mild, with Chana explaining a number of weeks ago during seudas shlishis; a Gerrer Chossid threw a chair at Rav Mendelsohn.

As disturbing and despicable as these occurrences appear, they are a reflection of a wider phenomenon.

Interestingly, a story appears in the secular Walla News, quoting Gur askanim, who insist
“we were invited to attend shabbos davening to complete the minyan”, [a statement that is far from reality, since the Chabad rabbonim and shul gabba’im state this simply is not the case].

Gur askanim insist that when Rav Lipsker was alive, they were the main mispalalim in the shul, and since he was niftar, Chabadniks removed their name tags from seats and are working to oust them from the shul. “Even small children are not permitted to sit” Walla quotes a Gur official in Arad as saying.

YWN-Israel contacted Rav Mordecai Volkovitz on Monday, January 11, 2010 at 12:14pm, seeking to permit him to explain more details regarding the Gur version of the situation, to present the other side of the events described by the Chabad community. “I don’t speak with journalists” he retorted and hung up the phone, even though he was told YWN is a member of the chareidi press, he unilaterally ended the conversation.

Rabbi Aryeh Rotenberg, principal of the Shuvu, met with representatives of the central shul several weeks ago to discuss the situation, demanding that Chabad make way for the Gerrer community. When the synagogue’s board of directors refused, Rotenberg and two other Gerrer representatives informed them they would regret the decision, Chabad officials told YWN-Israel.

It is Rotenberg, himself a Gerrer chossid, who has since personally appeared at the central shul daily with at least 20 young members of the chassidus. On the shabbos, he has arrived with 60 to 150 others, mostly men in their early 20s, personally directing them in their provocations.

Gerrer chassidim not involved in the conflict have said quietly that he has received direct orders from the head of the community, Rabbi Mordechai Volkovitz, to “do whatever it takes to take over the Central Shul.”

Several weeks ago, Volkovitz allegedly ordered the Gerrer shuls throughout the city be closed on shabbos in order to enable more chassidim to participate in the provocations. The effort was stopped by a last-minute order from Yerushalayim after a strong warning against the attempt was received by the nationwide Chabad-Lubavitch Rabbinical Court.

Since the passing of Rabbi Lipsker, who also was Chief Ashkenazi Rabbi of Arad for 30 years, a number of other changes have taken place in the city. The Chief Sephardic Rabbi, Yosef Albo became the sole Chief Rabbi and developed a close relationship with the Gerrer Chassidim.

A notice was placed in last week’s local religious weekly bulletin announcing the new relationship: kosher certification of the two mehadrin bakeries and a local restaurant has come under the joint supervision of the Gur and the Arad Rabbinate, which R’ Albo heads. The change is significant; the kashrut division of the Arad Rabbinate had previously been independent.

YWN-Israel spoke with Rav Albo on Monday, January 11, 2010, during the morning hours, at which time he explained that Gur is not replacing the regular mehadrin Rabbanut kashrus, but the Rabbanut is working in “close cooperation with Rav Mordechai Volkovitz in order to accommodate the growing Gur community”, giving a hechsher on a number of stores including a pizza shop. The Rav added it is somewhat redundant since the same “yirei shamayim mashgichim” supervised prior to the agreement with the Gur community.

Last week a Gerrer spokesman claimed in an interview published in Negev newspaper that the Chabad Chassidic community controlled “three city shuls” in Arad, suggesting the Gur lacked shuls and places to daven.

The community, comprised of approximately 300 families, is indeed growing exponentially, with young families taking advantage of the low-cost housing in the area. The neighborhood in which the community lives has spread out from its original location, and Gerrer Chassidim have gradually taken over adjacent areas.

“Such a claim is laughable at best,” however, noted Rabbi Mendelsohn. “Go to the Keren Arad website, the fundraising agency for Arad. It is run by a Gerrer Chossid, Avraham Kaminer, a former deputy mayor here who is still deeply involved in the political echelon. It is written in English, for foreign consumption, and anyone unfamiliar with the city would think there are no religious Jews living here, other than Gerrer Chassidim, and that they live in “perfect harmony” with their non-religious neighbors. Nothing could be further from the truth.”

On the site there is detailed information of all of the Gerrer religious institutions, the Shuvu School – run by a Gerrer Chossid – and the Bnei Akiva girls’ high school, which is carefully not described as a religious institution, despite its clear dati leumi affiliation. There is no mention whatsoever of the Chabad-Lubavitch presence in the city: its large girls’ elementary school, boys’ elementary school, rabbinical studies program, kindergarten and nursery schools simply do not exist, as far the Arad Foundation is concerned. Nor is there any mention of the 26 shuls in the city, including the dati leumi yeshivot and shuls, the Ethiopian, Sephardic, Yemenite, Ashkenazi, and other community congregations.

Gerrer chassidim have slowly begun to take control over smaller shuls in areas adjacent to their neighborhood as well. The management board of a government-built community center located next to the neighborhood recently came under the control of Gerrer chassidim. Likewise the city’s emergency medical center, located in the city hall complex, which was built with money raised by Kaminer under the auspices of the Arad Foundation, which he heads.

The chassidus also boasts a spacious shul and the largest yeshiva complex in the city, comprised of several buildings.

Chabad is by and large remaining passive, seeking to avoid the physical confrontation, but has hired the services of a law office, represented by attorney Talya Gorodish. She explains that Gur is acting ‘out of spite’ and many of the accusations are disproven in simple fact, including allegations that Chabad is seeking to take their seats in the main shul. She explains after R’ Lipsker was niftar; they began trying to change realities, create new ones that are more suited to their agenda. One must remember she points out that this central shul is a municipality shul and not the property of any sect. It is not a private shul.

Rabbi Shimon Elharar, Chabad shaliach to the Dead Sea and former assistant to the late Rabbi Lipsker noted, however, that the issue is not really a struggle between two Chassidic groups, but an issue of Gerrer Chassidim fighting for control of the city of Arad itself.

Together with Lipsker, Elharar worked in outreach programs for years in the city’s public schools, “from kindergartens all the way to the high school,” and said if the trend continues, the Arad community members will have nowhere left to daven.

“The central shul has been their place for 30 years. Rabbi Lipsker ministered to the entire community, and he never differentiated between those who were religious and those who were not.  He spent so much time in the ORT high school, for instance. Ask them,” he suggested.

“If the Gerrer Chassidim succeed in their attempt to take over this place, where will the rest of the city’s residents be able to daven on Rosh Hashanah and Yom Kippur this year? This is only shul in the center of town that is left to them.

“The Gerrer Chassidim certainly do not welcome non-religious Jews into their own shuls, I assure you.”