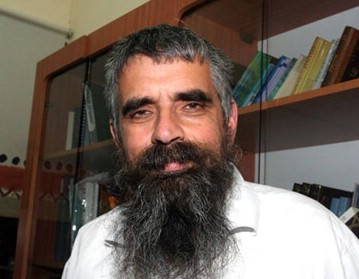 Rabbi Yuval Sherlow is commonly found in the hot seat, not afraid to express unique views – at times views that reflect the opinion of few or possibly just his.

Rav Sherlow appears to have done it again, this time stating the State of Israel has the halachic right to declare the boundaries of Eretz Yisrael, a statement that has elicited the ire of many a rav. Quoted in the weekend Makor Rishon newspaper, the rabbi explains the State of Israel has the right to adjust the borders of Eretz Yisrael as it deems the situation demands. Speaking with Kol Chai Radio on Monday night, the rav confirmed the quote is accurate, and it was taken from his writings, word for word. (The direct quote did not appear above, but a synopsis).

Rabbi Sherlow explained that first of all, one must realize halacha is paramount regarding following orders or defying halacha [in the IDF], but the question is how does one interpret halacha, leading to the controversy.

KOL CHAI: If the government decides tomorrow to give away Chevron that is okay since that is what the majority decided is proper and good for us. Is this correct?

RAV S: No, this is not what I am saying. Just as there is supervision in the chiloni world, in many areas via the court and judicial system, the same holds true for us, the Jewish Law, halacha supervises our actions. If the state wishes to relocate to Uganda for example, this is contradictory to halacha as per many sources speaking about “yishuv haaretz” (the commandment to settle the land).

On the other hand, we do not and should not keep 1.5 million Arabs under our rule and therefore halacha dictates we must do what is necessary to alleviate the situation since it causes us significant damage, to the People and Eretz Yisrael.

KOL CHAI: For those who believe the State of Israel is ‘Acalta D’Geula, then the decision of the government is Divine Intervention and one cannot argue against it. The chareidim do not accept this but the dati leumi community does and once there is a government, it has the right to make these decisions, even if they do not find favor in our eyes.

RAV S: I intentionally did not enter into matters of geula and hashkafa, but focus on halacha only. Yes, the other influences are there but if you notice, I did not use the words “geula” or “achalta d’geula” at all. Even if the state does not represent the initial stage of geula, nothing changes. I said there is supervision on the state too, halacha. If we ask ourselves, does halacha reject and concessions on behalf of the People and Eretz Yisrael. To this I believe the response is no, this is not the case. Now what remains is to discuss the parameters, the limits to such steps. Those who oppose any concessions believe this is not open for discussion and concessions may be made at any price.

I back up my position of course with sources, dividing the work into two. The first part deals with the halacha, and how and when does the mitzvah of ‘yishuv haaretz’ come into play. What are the sources? Does pikuach nefesh override such considerations?

I feel that these halachic matters must be discussed and a consensus must be reached.

KOL CHAI: Where do you get the courage to publicize such views?

RAV S: The truth is that I withheld the feelings for a period of time, over a month. When I saw the controversy over the hesder yeshivot and Rav Melamed, I felt it was better to remain silent. When did I make the decision to break in you ask, when I felt the diyun (discussion) was being pulled in a direction that the state was put ahead of the Torah and I felt that then, only then, I was compelled to come out publically for halacha must remain paramount.

Part of Rav Melamed’s statements and others were due to their dilemma that the state is compelling me as an individual to violate halacha. This compelled me to speak out. The fact that the state and government are not run in accordance to halacha is another matter.

KOL CHAI: Reality is that the decision-makers are not G-d fearing and they are White House fearing or concerned for their seats, their positions. I cannot say these are my leaders and they act in our best interests. It’s not exactly so.

RAV S: This is not related to what I wrote. I did not release an operative plan. I believe that the fact the government does not have the correct considerations vis-à-vis Eretz Yisrael is in itself problematic. I wrote something more practical, from my beis medresh, that is to say theoretical halachic discussion, if the government is acting within its permitted mandate according to halacha.

Now you are asking a different question, a heavy one. By the way I opposed the expulsion [from Gush Katif] and worked against it but now you are asking something else, and in principle, yes, it is permitted. The question is just what the government’s consideration is in the decision-making policy.

KOL CHAI: When you wrote your hypothetical opinion, is this only when the government decision-makers are G-d fearing or not?

RAV S: No.  We generally begin however with a p’sak referring to an ideal situation, which this is not. Then we begin to delve in the current less-than-ideal situation. Within the current realities, what can we do? An example of an ideal situation would be the authority of a rav when there is a Sanhedrin, and this is quite clear. Today, the situation is not ideal, and we must reach conclusions regarding local rabbonim and gedolei hador, but it is not the same as one who defies the Sanhedrin.

We must address the ideal situation and the current less-than-ideal reality.

KOL CHAI: Would I be correct if I understand your words that one may not expel yishuvim and remove Jews from their homes?

RAV S: No, no, what I am saying is quite the opposite. In principle, the halacha compels the government to act for the good of the People and Eretz Yisrael even if this means removing yishuvim and residents.

KOL CHAI: This p’sak was already released by Rav Ovadia.

KOL CHAI: What comes first, the Torah of the State?

RAV S: The question is silly. There is no room for consideration. The Torah must always be of paramount importance.

KOL CHAI: You ask why I pose the question. Because more than a few people in the dati leumi camp feel this way. Look how they compromised Rav Melamed’s honor. Instead of all of you, including R’ Sherlow, coming out and stating that all other issues must become secondary after Defense Minister Ehud Barak compromised the integrity of the Torah, you all acted inappropriately. This should have been the battle cry yet it was not. What became the main issue was insubordination yes or no, not kovod HaTorah. We must fight for kovod HaTorah and we did not see this.

RAV S: You are correct and for the record, Rav Melamed and I are friends but I ask myself the same question. I ask you as the defense minister would you tolerate soldiers who sit in yeshiva in a military framework refuse to come out against protests in the military and they are inculcated with values that officers are only cronies looking out for their seats. Both my friend Rav Melamed and Barak are not approaching this in the correct fashion. But what is all of this to do with the state?

KOL CHAI: The defense minister made a decision against R’ Melamed because he was summoned and did not come.

RAV S: No this is not correct. In this case I know what occurred. This began with the IDF central district commander and the chief of staff. Forget the historical issue. I state that a diyun must be held on the very essence of the matter.

KOL CHAI: No. this is a simple issue of kovod HaTorah.

Rav S: If it was as you say, then we should have gone for broke, without holding back. We are divided as to the facts, nothing more.

KOL CHAI: It is simple. Barak summoned him. He did not come and then he was ousted.

Rav S: No, we do not agree on the facts.

KOL CHAI: For me it is simple. The defense minister insulted kovod HaTorah and nothing is done. Do you receive threats?

RAV S: No, in our world ‘threats’ are in the form of talk-backs and forums, nothing more.

(Synopsis) There is much to say but I will attempt to focus. The entire matter with R’ Melamed and all surrounding it became a side issue the minute Defense Minister Ehud Barak announced there is only one commander in the IDF, no one else. Then R’ Sherlow comes and accepts Barak’s position. Whatever he says we will accept. Rav Sherlow tries to persuade the tzibur in the name of unity and maintaining the integrity of the IDF.

There is no such acceptable position. Perhaps it is just my understanding, but in his writings, R’ Sherlow adds that one who refuses an order in the IDF is violating a halacha. It simply is not so. He intimates that one who does not adhere to the halacha, as he sees it, does not earn a place in the World to Come.

I am not deciding who is great and who is not. I know my small place.

The minute that Barak stated “there is one commander” the roshei yeshiva should have come out vocally and collectively, “yes, there is one commander, HaKadosh Baruch Hu” and I am willing to go to the battlefield with this but if Barak gives an order against halacha, one simply cannot adhere to it.

I was among the first hesder students some 50 years ago, and then a hesder rav and IDF Northern Command rav and I know exactly how things were. There were cases in which I told them they must be insubordinate when orders contradicted halacha, and Raful wanted to put them in jail, but backed down, as Barak and Ashkenazi must do to since no authority can usurp Torah and HaKadosh Baruch Hu.

KOL CHAI: With all due respect, Barak hears other voices and opinions, not just Rav Ariel.

RAV A: Yes, to my profound sorrow, the roshei yeshiva did not act appropriately. There is a principle of Kiddush Hashem, and they missed the opportunity and need to respond. Ask Rav Sherlow what comes first and Rav Sherlow and others stuttered and beat around the bush. They have one option here regarding Barak, the Torah calls for defending Eretz Yisrael and all other options are unacceptable.

Rav Sherlow is a graduate of Yeshivat Har Etzion in Gush Etzion and currently the rosh yeshiva of the Petach Tikvah Hesder Yeshiva. He is a retired IDF major and in the past, served as rav of Kibbutz Tirat Tzvi and the hesder yeshiva in Chispin. He is perhaps best known as a founder and driving force behind the Rabbanei Tzohar organization.

Rabbi Yisrael Ariel Shlita was the chief rabbi of Yamit, which was destroyed by the Israeli government of Menachem Begin. He is currently the chief rabbi of Ramat Gan. He founded the Machon HaMikdosh, and was privileged to be among the paratroopers who in 1967 liberated the Kosel from Jordanian occupation. He was number two on the now-illegal Kach Party headed by Rabbi Meir Kahane HY”D. He was also involved in efforts to renew the Sanhedrin.