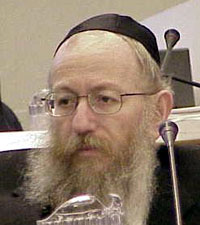 Deputy Health Minister R’ Yaakov Litzman has used his influential position to intervene towards expediting permits attesting to acceptable sanitation conditions in 5,000 chareidi mosdos. The health permits are a prerequisite to the mosdos receiving an operating permit from the Education Ministry.

The permits involve sanitary conditions, as well as classroom conditions to prevent severe overcrowding. The buildings are also inspected for basic safety issues as well as verifying there are an adequate number of bathrooms in acceptable hygienic operational order. Such inspections are customarily conducted during a school year, permitting inspectors to observe real conditions and to ensure the students are not exposed to unacceptable conditions. Those mosdos not meeting the minimum standards are not given an operating permit, which means state funding is not forthcoming.

According to a 2008 State Comptroller’s report involving private sector schools in three municipalities, the results in chareidi schools revealed cause for concern, serious deficiencies and health and safety issues that demand immediate attention. Many mosdos according to the state comptroller are simply neglected and not suitable for students.

Senior officials quoted anonymously in the daily Yediot Achronot explained that Litzman applied enormous pressure on district level health officials and inspectors to ensure the chareidi mosdos receive the permit to permit licensing and funding. He applied “considerable pressure” to certify as many mosdos as possible, to enable funding, demanding they be given “top priority”.

One physician involved in the process quoted anonymously explains “he repeated over and over again the significance of these schools receiving a passing grade, as quickly as possible”. As a result, ministry physicians on the district level acted expeditiously and did whatever they could to comply with the Litzman’s directive.

Litzman explained his actions on Sunday — that it is simply unacceptable for hundreds of files remain on a desk due to lack of manpower and during the interim, the mosdos do not receive funding. Litzman insists that he compelled them to conduct inspections but never ordered anyone to pass a school that does not meet minimum requirements.

The report added that directors of some of the mosdos also worked to extend the period of sanitation permits, from one year to five, and as a direct result of Litzman’s intervention, the permits are now valid for three years. Litzman explains this corrects a discriminatory practice, since now, the permits will be valid for three years, as is the case for public schools. “Some chiloni schools are inspected once in five years” he added. He rejected the former arrangement that compelled chareidi schools to undergo inspection annually when other schools are held to a different standard.