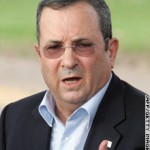 Defense Minister Ehud Barak addressed a conference in Bar Ilan University today, Tuesday, addressing an array of issues, including the threats faced by Israel from Syria and Lebanon.

Addressing Lebanon, Barak cited the failures of the government of Lebanon to implement the Second Lebanon War ceasefire agreement, namely United Nations Security Council Resolution 1701. He confirmed the unacceptably large number of rockets in southern Lebanon, and the fact that “militia members” are members of the ruling government.

He spoke of the need to make land compromises, addressing his comments to those who “wear kippot” and their constant reference to “Hashem’s promise”. He drew reference from Sefer Melachim, stating we see how the maps of the land fluctuated in accordance to political realities, stating the step is “painful” but it must be made since there are “millions of Palestinians” and failure to divide would result in a binational state.

He did also make mention of the situation of Gaza, confirming what Israelis already know, that there are rockets in the Hamas-controlled area capable of striking Tel Aviv.

Barak made reference to Syria’s cozy relationship with Iran and Hizbullah, quoting a recent Der Spiegel report confirming Iraq will be capable of building an atom bomb within a year, with Tehran working with diligence to build warheads capable of carrying non-conventional warheads.

Barak stated it is not likely that Syria will launch a strike, but in any case, it is to Israel’s advantage to remove Syria for the circle of threats, hoping to reach a diplomatic accord to Damascus.