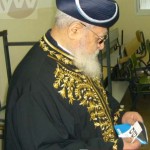 The Shas Council of Torah Sages is preparing to convene again, next week, to address harsh accusations leveled against the party for its decision to become the first chareidi party to ever join the World Zionist Organization. Some reports indicate that some of the rabbonim on the council wish to reconsider the decision, while others explain this is not so, but they wish to release an explanation, to expound on the reasons behind the decision to join the World Zionist Organization, a move that enjoys the support of Chacham Rav Ovadia Shlita.

MK (Yahadut HaTorah) R’ Moshe Gafne has launched a scathing attack against Shas for its decision, leading to responses and additional verbal attacks, placing a significant barrier between the ashkenazi and sephardi chareidi parties.

Not taking an apologetic position, Shas’ ‘Yom L’Yom’ newspaper on Thursday presents a response to the harsh criticism against Shas. The newspaper also makes reference to Yated, which apparently refused to publish Shas’ response, stating as such, Yated no longer has the right to refer to itself as the “Shofar of Gedolei Yisraeli Shlita”.

The Shas newspaper dedicates a number of pages for its counter attack against Yated and R’ Gafne.