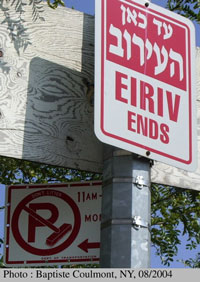 As members of the Jerusalem Religious Council completed work on the eruv in the southwestern areas of Yerushalayim, workers simultaneously removed 80 “pirate poles” that were placed in a number of areas without authorization.

City officials are calling on residents not to permit themselves to be dragged into the conflict by “extremists” on either side, pointing out the setting in place or removal of eruv poles independently is a violation of the law. Residents are urged to telephone the city’s 106 number and to report any poles set in place or removed without authorization.