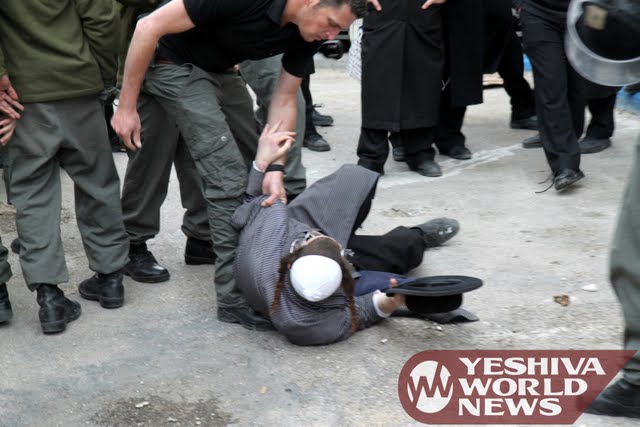 [VIDEO, PHOTOS & UPDATES BELOW] Rioting is taking place at this time in the Batei Warsaw in Yerushalayim. The violence began early Thursday afternoon. The loudspeakers called on people to come and take part and within a short time, several hundred people were on hand, some taking part in the violence and other observing. The scene is literally one of chaos and vandalism, random destruction of property.

From what YWN-Israel was able to learn, the violence surrounds the Biderman Kollel Hekdesh in the Batei Warsaw neighborhood. It appears as members of the elderly kollel are niftar, the hekdesh has brought in tenants that do not find favor in the eyes of the veteran Yerushalmi residents to put it mildly. The new residents are not receiving the apartments with ‘key money’ as is the norm, but simple rentals.

It should be pointed out that the elderly and veteran Yerushalmi residents are not out in the streets taking part in the indiscriminate violence. Some of the shouts include “murderer” and the sounds of what appears to be breaking windows can be heard. A number of MDA ambulances seem to have evacuated injured from the scene, and police Yassam tactical forces are on the scene, but seem to remaining outside the perimeter, apparently ordered not to get involved.

One resident who agreed to explain stated they are displeased with the newcomers and simply are requesting slots on the vaad to have a say regarding the future of the community. No one seems to know [or willing to tell] who is behind the violence taking place at this time.

UPDATE 4:05PM IL: Police eventually moved in and made four arrests. It appears the detainees may be charged with disorderly conduct. An undetermined number of people tried moving into, and perhaps in some cases were successful, in apartments which residents report are not theirs.

UPDATE 7:00PM IL: Yerushalayim askan Yossel Kroizer, a well know personality in the area was injured in the violence at Batei Warsaw, apparently in need of hospitalization but he has refused transport. He is remaining on the scene with his head bandaged. Large rocks have been thrown at one particular apartment, and violence is not abating.

At least five people have been injured in the mayhem, apparently from rocks thrown in the area. The area is shut down and all public transportation has been halted.

Police are preparing to forcibly enter the apartment in question. Five people were arrested and four have been released. The remaining detainee will most likely spend the night in jail and brought before a remand hearing on Friday morning.

It appears the young man in detention may be connected to earlier acts of violence in the capital.

According to some area residents, the scene in Meah Shearim is nothing less than a “chareidi intifada”.

UPDATE 11:15PM EST: Yitchok Russek / Kuvien Images was on the scene of the Hafganos, and YWN presents video footage and a large photo album to our readers exclusively. The images speak for themselves….. (Just as an interesting note, see the 20 second mark of the video where an officer suddenly walks over to a 13-year-old boy and kicks him in the back.)